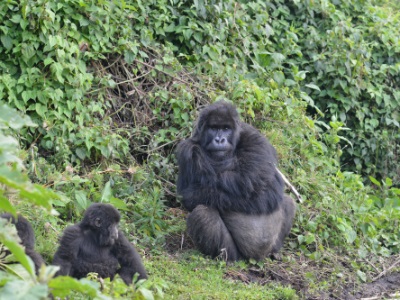 After many months of an undiagnosed illness, silverback leader Ugutsinda passed away on Oct. 15, on what would have been his 25th birthday. Although he managed to keep up normal activities in the months prior, at times he was not with his group and was losing weight. His group was formerly led by his brother, Ntambara, who disappeared from our tracking in February, also following an undiagnosed illness.

Despite an intense search, Ntambara’s body could not be found, but with Ugutsinda’s death, Fossey Fund trackers and park authorities were able to recover the body quickly and thus to perform a necropsy (post-mortem examination). The necropsy, carried out by Gorilla Doctors, showed that Ugutsinda had a chronic condition affecting his digestive tract, but the cause of this condition requires further analysis. Tissue samples were taken and will be analyzed further by Gorilla Doctors in the United States.

His group appears to have adjusted to the death, possibly because he had left and re-joined several times in the eight months prior to his death. Luckily, there is a secondary silverback in the group – Twibuke – and he may eventually be able to take complete authority in the group. He played this role on the occasions when Ugutsinda was absent, though always ceded dominance back to Ugutsinda upon his return.

Ugutsinda was born in a group originally monitored by Dian Fossey, called Group 5. His mother was Kwiruka and his father was the well-known silverback Pablo. When the group split in 1993 into Pablo’s and Shinda’s group, Ugutsinda was 3 years old and followed his mother to Shinda’s group.

Another brother, silverback Wageni, also died this year, but there are still two sisters living, in different groups.

Since the group was formed at the end of 2008, the two brothers always exhibited a peaceful and efficient alliance, with Ntambara as the alpha and Ugutsinda the beta male. Ugutsinda took over the dominant position from Ntambara gradually in 2012, but both silverbacks kept a central position in the group despite some struggles for dominance, which took place without physical fights. Ntambara disappeared from the group on Feb. 6 after exhibiting signs of illness, including swollen eyes and weight loss, leaving Ugutsinda fully in charge. Now, we’ll see if Twibuke can fill this important role.