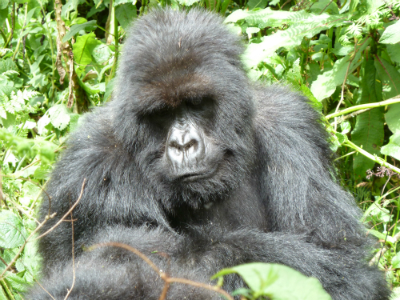 Umusatsi, a 28-year-old female mountain gorilla, has been missing from Kuryama’s group since Dec. 17. Ordinarily, we would be concerned about a female's disappearance from her group, but Umusatsi has a history of traveling alone for days or even weeks at a time and is experienced in the forest, as we have reported in the past.

Umusatsi began leaving Kuryama's group in 2008 when her son, Rwema, was still a young infant. They left again three times in the spring of 2011, following inter-group interactions, but returned each time. In early February of 2012 they left for two weeks. Rwema, though now an older juvenile at age 5 and capable of surviving apart from his mother, seems to be traveling with Umusatsi this time as well.

The Fossey Fund field staff is using a special team of trackers to try to locate Umusatsi. Kuryama's team is also keeping an eye out for Umusatsi and Rwema as they go about their routine monitoring of the group. Given her experience surviving in the forest alone, we feel confident that Umusatsi will rejoin the group again soon as she has done in the past. (See the Fossey Fund blog and news pages for further developments.)

Umusatsi's behavior is very unusual among the female gorillas we monitor. Females and especially their offspring are usually better off in the safety of a group with the protection of a silverback. One of her previous absences occurred after she had been observed copulating with Kuryama, suggesting that she might have been fertile at the time and wanted to find new mating partners, but this does not explain why she took the risk of allowing Rwema to accompany her. 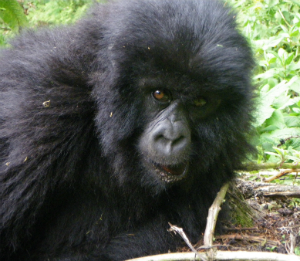 We still have no clear understanding of why Umusatsi developed this habit, but at least we can feel a bit less concerned for Rwema, now that he is older and less of a target for infanticide by lone silverbacks or silverbacks from other groups than he was when she used to travel alone with him as an infant. Kuryama’s group seems to accept her when she returns; on one occasion the two silverbacks in the group made frequent displays at her, while her return from a later absence was greeted with indifference, probably because the silverbacks were still recovering from wounds inflicted in an interaction.

The field staff will continue to monitor the behavior of this independent female and her son. It is another example of the variety of behaviors that can be seen during long-term observation of gorilla behavior. Rwema was also one of a group of juveniles observed dismantling a poacher's snare last year – a feat which attracted attention from scientists and animal lovers worldwide.