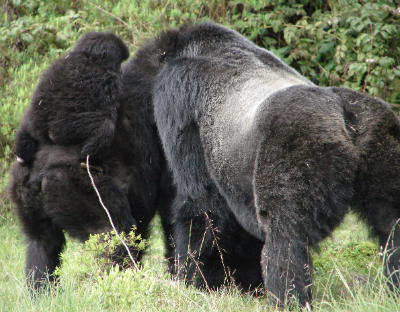 The team located Bwenge's group outside of the Volcanoes National Park border this morning, in the Muntu area, around 8:25 a.m. The remnants of the snare still dangled from Gasore's right foot, although he did not seem to be too distracted by the long length of rope trailing him everywhere he went. While outside of the park, the infant stayed close to dominant silverback and father Bwenge.

After an hour had passed, the group began to move back into the park of their own volition and settled in the bamboo belt near the border. The intervention team lingered by the group, waiting for an opportune moment to dart (preferably when mother and infant were peripheral to the group), however that moment never came. Dr. Eckardt reported that mother Maggie was "very alert in the bamboo. She kept an eye on us the whole time." Eckardt added "Maggie is almost like a second silverback in the group – a very confident female. It is common for her to leave the group or travel peripherally." The team was hoping to take advantage of such an occurrence to safely dart the mother and her infant.

At 11:35 a.m. the entire group was resting fairly close together, but Drs. Kinani and Ramer decided to proceed with the intervention. Maggie and Gasore were about one meter apart. Darts were fired simultaneously. Immediately after, the mother grabbed her infant and ran with the rest of the group. Silverback Bwenge charged the intervention team, screaming loudly, but changed his mind and retreated with the rest of the gorillas up over the crest of a hill. 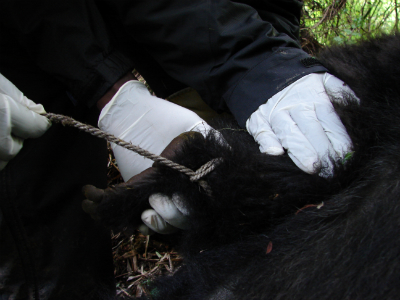 The team waited 10 minutes for the sedative to take effect and then moved to find the gorillas. The trackers discovered Maggie lying face down on the side of the slope, on top of her infant. The team quickly moved the mother off her baby and realized that Gasore had not been darted. The vets then injected the infant directly into his back and he was anesthetized shortly after.

During the intervention, the customary samples were taken, physical exams conducted and the snare rope was removed from Gasore's leg. Bwenge's group stayed at least 50-100 meters away from the team as they worked, so there were no interactions with the trackers. Although both mother and infant woke up prematurely and had to be sedated a second time, the entire intervention was completed in an hour and the team was pleased. Maggie and Gasore both received the sedative reversal and, once they regained their strength, rejoined the rest of their group at 12:38 p.m.

This is the third intervention for Bwenge's group in less than a month. The Fossey Fund staff is relieved that this intervention went smoothly and we hope that Bwenge's group will have a reprieve from any dramatic incidents in the coming weeks. The anti-poaching team combed the area for additional snares today, but none were found.