An infant Grauer’s gorilla was confiscated from members of an armed militia in the Democratic Republic of Congo (DRC) this week. A Fossey Fund partner organization, Jeunesse pour la Protection de l’Environnement (JPE), received information that some individuals were in illegal possession of an infant gorilla at the end of August 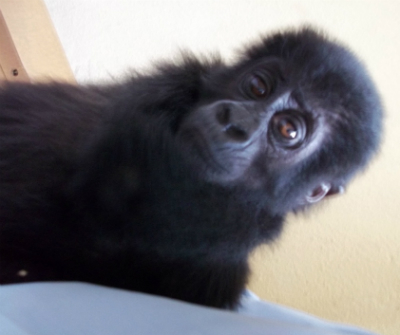 and worked for weeks to determine its location. On Sept. 12, JPE and Congolese law enforcement collaborated to recover the young gorilla.

Once the infant was in the care of JPE, it was taken to Kahuzi Biega National Park where ICCN (Congolese park authority) staff and veterinarians from the Mountain Gorilla Veterinary Project (MGVP) received it and assessed the infant’s condition. The infant appears to be approximately 1 ½ years old, and seems to be in relatively good condition. It did show signs of fatigue and dehydration, which we suspect were caused by travelling long distances between villages before it was confiscated. It is believed that the gorilla originates from a village in North Kivu Province in DRC, though it was confiscated in South Kivu Province.

A couple of days later, the gorilla was transported to Goma and then to the Senkwekwe Sanctuary for mountain gorillas, in Rumangabo, where it will spend some weeks in quarantine before being transferred to the Gorilla Rehabilitation and Conservation Education (GRACE) center for Grauer’s gorillas.

The Fossey Fund has hired gorilla caregivers to look after the infant and try to manage its stress. The Fossey Fund's Grauer's Gorilla Conservation and Research Program Manager Urgain Ngobobo explains, "We provide food and non-food items necessary for its stay in the sanctuary as well as for its caretaker, such as food, covers, towels, boots, uniforms and salaries for the caretakers. Every day we are assessing how things are going while we are waiting to take it to GRACE."

GRACE, where the infant will eventually reside, is a 350-acre facility where Grauer’s gorillas live in a social and environmental setting that mimics conditions in the wild. The land for the facility was donated by the Tayna Center for Conservation Biology and is operated by the Fossey Fund in partnership with the Walt Disney Company.

The Fossey Fund is proud to be a part of the team that rescued this young Grauer’s gorilla.