Twenty-three infant mountain gorillas received names in a ceremony held this June in Kinigi, Rwanda, near the national park where most members of this endangered species survive with the help of Rwanda’s Office of Tourism and National Parks (ORTPN), the Dian Fossey Gorilla Fund International, other wildlife conservation organizations, and local communities. Staff from DFGFI’s Karisoke Research Center were in attendance, and six infant gorillas from the gorillas groups we monitor received their new names. 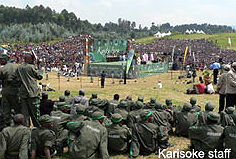 “Kwita Izina” originated as a traditional celebration to name human babies eight days after birth. Rwanda has adapted the ceremony as a yearly event to honor the animals who are an important part of the nation’s heritage and also attract thousands of tourists each year. President Paul Kagame, who officiated at the ceremony, pointed out that mountain gorilla protection and tourism cannot be successful without the full participation of the community.

The ceremony included traditional dances and music, plus a poem read by a local child, 13-year-old Marie Aline Uwayezu, who also named one of the gorillas. Another community resident chosen to name a gorilla represented a group of reformed poachers who now play a positive role in conservation.

Over 600 officials from the Rwandese government, the private sector, and regional and international organizations attended, united by the theme “Caring for wildlife concerns us all.” Gorilla tours generate three quarters of the country’s tourism income, part of which is returned to the communities to support health, education and economic development projects.

Karisoke staff are proud to have participated in the naming ceremony and to be able to continue to monitor and protect a large segment of the endangered mountain gorilla population of the Virungas, including the newly named infants.