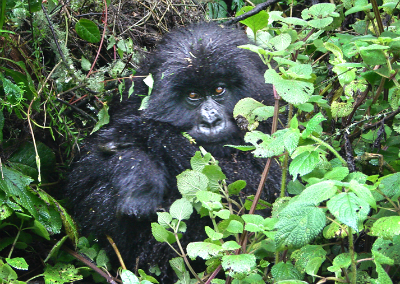 Inziza, a 17-year-old female, and her infant were trailing behind their group when an unidentified lone silverback burst onto the tranquil scene near the Susa River. It is possible that the lone silverback's attempt to acquire Inziza might have occurred without bloodshed, because the female reportedly showed little reluctance to follow him. However, when Inziza's 3-1/2-year-old infant Igitangaza attempted to follow her mother out of the group, the lone silverback reacted aggressively, turning his fury on the youngster.

Ugenda's beta male, Wageni, heard the infant's screaming and, running back towards the river, bit the lone silverback. Dominant silverback Ugenda maneuvered himself between the intruder and his females and when both Ugenda and Wageni began their chest beat displays, the lone silverback retreated back into the forest.

Igitangaza bore the brunt of the lone silverback's aggression and was reported to have suffered the most substantial injuries of the group. The young gorilla lost her entire ring finger and has several deep lacerations across her right hand, leaving it with a "mangled" appearance.

Veterinarians from the Mountain Gorilla Veterinary Project, Fossey Fund and Karisoke researcher Winnie Eckardt, PhD, and the trackers who regularly follow Ugenda's group trekked up Mount Visoke's western slope early Sunday morning, prepared to do a medical intervention on the infant if necessary. Once the party reached the group, it became evident that other members had also sustained smaller injuries from the interaction. Fifteen- year-old-female Kanama had a deep cut on the back of her right hand; 16-year-old silverback Wageni had an open wound on his neck; and 7-year-old female Kubana was sporting a short cut near her left eye.

The MGVP veterinarians felt that, although Igitangaza's wounds were severe, the bleeding had subsided and a medical intervention was not necessary. Igitangaza was feeding periodically and did not have a problem keeping pace with the group. The youngster must have been in a considerable amount of pain as she alternated between licking the wounds and cradling her injured hand. She was observed shivering occasionally, but her decreased activity and slight decline in food intake are thought to be the cause. Overall, Dr. Eckardt says that she seems to be coping relatively well, considering the circumstances. The researcher also reported that she kept close to dominant silverback Ugenda and mother Inziza, attempting to suckle at various times throughout the morning's observation.

Inziza is in the process of weaning Igitangaza, which can be a stressful time for a young gorilla. The injuries that the youngster incurred undoubtedly add to her stress and both the MGVP and the Fossey Fund will be monitoring the situationclosely for any signs of infection or decline in her health condition. We will provide updates when available.