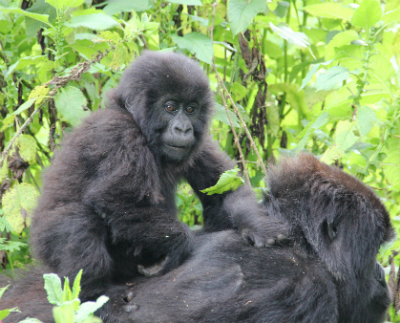 On June 22, 2012, we reported that an infant from Urugamba’s group, two-year old Turate, was not using his right arm, which was swollen and twisted. The injury was first noticed by Dian Fossey Gorilla Fund trackers, which prompted a visit from Dr. Jean-Felix of the Mountain Gorilla Veterinary Project. Indeed, although the infant was not using his right arm, he appeared to be eating and playing, making do with the use of his left arm and right foot. He was even seen climbing a tree. His mother, Pasika, also assisted him by carrying him frequently.

A second check by Dr. Jean-Felix on June 26th did not reveal much improvement. Turate used the fingers of his right hand, which was a good sign, but the elbow was noticeably swollen. Dr. Jean-Felix suspected that the arm might have been dislocated, but could not be certain with only a visual assessment.

Trackers did not observe the actual cause of Turate’s injury, but given the available information, Gorilla Program Coordinator Veronica Vecellio hypothesizes that it was probably inflicted accidentally by an adult gorilla in Turate’s group. Turate might have been caught in a fight between the two females in Urugamba’s group: his mother, Pasika, and Bishushwe. Another possibility is that the silverback was disciplining Pasika or even Turate, and accidentally hurt him more severely than was intended.

Fortunately, this tough little gorilla seems to have made a full recovery. On July 11, Dr. Dawn Zimmerman, also from the Mountain Gorilla Veterinary Project, observed Turate using his right arm normally. Turate is just one more example of gorillas’ amazing ability to cope with pain and heal themselves in the wild, given a safe, healthy, and low-stress habitat.