Karisoke researcher Winnie Eckardt, Ph.D., accompanied the team assembled to assess the condition of injured dominant silverback Inshuti this morning. Eckardt reported that “although his injuries are indeed severe, the group leader appears to be toughing it out — in typical Inshuti style” and a medical intervention was not necessary. She added “overall, the group appears to be exhausted from the incident and was traveling slowly, stopping frequently to rest.” With Inshuti injured, adult female Shangaza took the initiative to lead the group away from the one lone silverback who was still on the trail of the group. 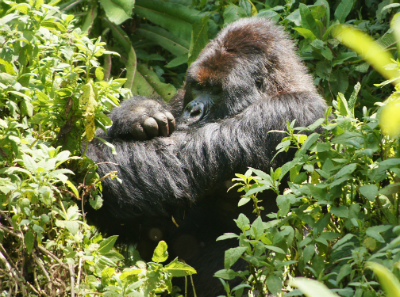 Karisoke trackers were able to successfully identify this remaining lone silverback as 21-year-old Turatsinze — the same male that participated in an interaction with Titus group last November in an attempt to acquire female Ubufatanye (Fat). Turatsinze has been a lone silverback since 2006 when he dispersed from Pablo group on Oct. 18 of that year. It appears that he has traveled solo long enough — and is anxious to start his own group.
And Inshuti is all too familiar with Turatsinze’s struggle. Interestingly, Inshuti is one of the few lone silverbacks observed by the Karisoke Research Center to build a group “from the ground up,” gradually acquiring one female after another. Eckardt reflects that he was “incredibly tenacious and tough. He wasn’t going to give up until he had formed his own group.” It appears that same strength and tenacity has served him well in keeping his group together.
Inshuti was observed directing “neigh vocalizations” towards female Taraja three times this morning. This could provide some insight as to what lured the lone silverbacks to his group. Over the last week, Inshuti was seen copulating with the female, which could indicate that she may be able to conceive again. Inshuti’s “neigh vocalizations” could have been an attempt to strengthen the bond between the pair, and deter her from leaving his group to accompany the lone silverback.
Inshuti was feeding very little today and his condition must be monitored closely throughout the next several days by Karisoke field staff. MGVP veterinarians will visit the group again Tuesday to ensure that he is recovering smoothly. As for Turatsinze — the lone silverback was 700 meters from the group when the team left this afternoon and moving in the opposite direction. Trackers will continue to search for the missing lone silverback for identification purposes. 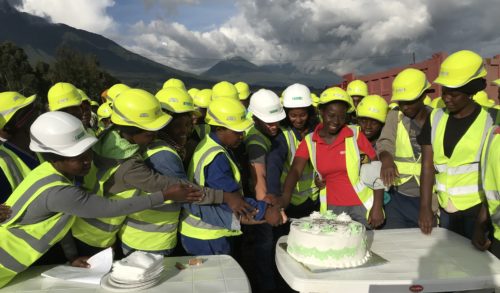