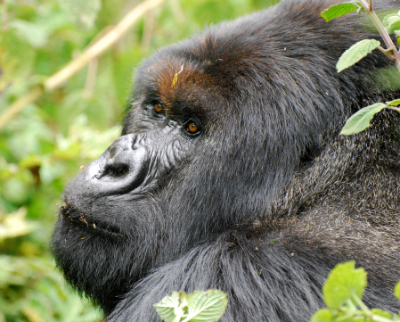 Like humans, mountain gorillas are highly social creatures with intricate hierarchies, group life and interactions. However, sometimes gorillas abandon their groups and live solitarily or with one or two other individuals. The silverback Inshuti is a noteworthy example of this.

Inshuti’s hostile temperament has made him one of the most difficult gorillas for the Dian Fossey Gorilla Fund staff to track, but also one of the most remarkable to observe. Among the many gorillas the Fossey Fund has followed long-term, Inshuti is known for his perseverance and physical resistance; no other observed gorilla has survived such severe injuries nor instilled the same amount of fear among other gorillas.
Inshuti was born in 1988 in Group 5, one of the historic groups habituated by Dian Fossey, and has been monitored by the Fossey Fund throughout his life. The group split into Pablo’s and Shinda’s groups in 1993.

While in Shinda’s group, Inshuti developed a peculiar temperament. His change in disposition was possibly encouraged by the presence of several other adult males coexisting in the same group. When he was 15, he left to become a solitary male. That’s when he became feared, not only by humans but also by gorillas of the neigbouring groups.

During solitary life, Inshuti grew in size to become one of the largest silverbacks known to the Fossey Fund. Since leaving Shinda’s group, he has consistently interacted with other groups– likely a strategy to attract females. Despite his intimidating size, sometimes his interactions have had severe consequences. In 2004, he was attacked by all members of Beetsme’s group, leaving him deeply injured but alive. Despite this event, Inshuti has initiated many more interactions to attract females.

In February 2007, he succeeded when he gained a female named “Ruhuka.” But, she spent only a few weeks alone with him before rejoining her natal group, Pablo. Later that year, Inshuti successfully interacted with Titus group and was joined by female Taraja. During the next four years, Inshuti’s group grew, female by female, until it reached the size of eight gorillas.

Then, suddenly the group faced some unfortunate events, including the death of three infants and one adult female along with subsequent transfers of the remaining females. By the end of 2012, Inshuti was left with only one female, Shangaza, with whom he formed a stable couple for many months. Inshuti and Shangaza were unable to be tracked for daily monitoring by the Fossey Fund staff and were only occasionally located. The two gorillas were last seen together on March 19.

It was a great surprise to see Inshuti alone on July 27 during an interaction with Gushimira’s group. On that occasion, Fossey Fund staff thought Shangaza was hidden somewhere, but we confirmed that Inshuti was a lone silverback on Aug. 30, when he was found definitely alone, calmly feeding.