Inshuti's Group Ranging on Congo Side of the Mountains 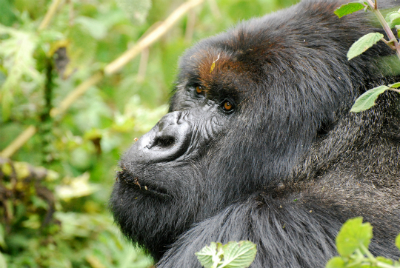 Since July 29, Inshuti’s group (which now consists of only Inshuti and female Shangaza) is ranging into the Democratic Republic of Congo’s (DRC) side of the mountains, in Virunga National Park.

On Saturday, July 28, trackers found Inshuti’s group very late, near Karisimbi, in an area reported to be near the RwandaDRC border. On July 29, they tracked the group starting from where they had left the two gorillas the previous day, but couldn’t find them. The tracks they found indicated that Inshuti and Shangaza have gone into Congolese territory. According to the report from the trackers, the two gorillas traveled a long distance on the afternoon and evening of the 28th and no food remains were observed on their trail, which suggests that they were under stress.

During the tracking, the trackers ran into six poachers with four dogs. The poachers and their dogs got away and trackers continued to follow the gorilla group’s trail until they found nests and fresh trails, this time near Visoke but still into Congo. 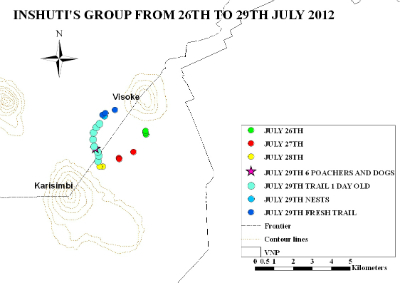 The map will give you an idea of how Inshuti’s group has traveled the last four days and their last known location.

Virunga National Park is dangerous at the moment, because of the presence of armed groups. It has been closed to the public since May.