Inshuti's Group is GrowingInshuti’s group is the most recently formed gorilla group in Rwanda’s Volcanoes National Park, where the Fossey Fund operates daily patrols and monitoring from our Karisoke Research Center. The group takes its name from its leader, Inshuti, a 20-year-old silverback who lived as a solitary male for four years, before forming his own group at the end of the 2007. At that time, he gained females Taraja and Ruhuka, who came from Titus’ group and Bwenge’s group respectively. 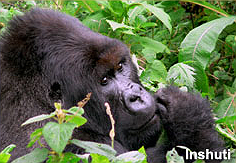 Even after these two females joined him, Inshuti continued interacting with other groups, with the ambition of increasing his group’s size. At the end of 2007, however, Taraja left him, spent a few days in Pablo’s group, then moved away with a young silverback named Giraneza. She remained with Giraneza for a month, until the end of January, when they encountered Inshuti.
Inshuti, a very large male (much larger than most silverbacks his age), took the opportunity to try and get Taraja back into his group, and challenged Giraneza. The smaller, younger Giraneza was obliged to give up and go away, and Taraja decided to rejoin Inshuti.
The next day, fresh from his last success, Inshuti interacted with Titus' group and gained another female, Shangaza. Again, this was fairly easy for Inshuti, since Titus is now a very old silverback. At the beginning of the 2008 the second silverback of Titus’ group departed to became a lone silverback and Titus has been left as the only protector of his group. Inshuti took advantage of his physical superiority and faced the old Titus, who couldn’t keep all the females under his control. So, Shangaza joined the group of Inshuti, which now includes four gorillas — one silverback and three females. 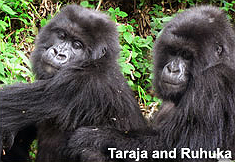 Inshuti’s group has been monitored every day by the Karisoke field staff and all observed behaviors between members are being recorded. We have noted that prior to his conquest in gaining two females, Inshuti was always very nervous and often interacted with other groups. For this reason, he used to travel long distances every day. Now that he has his own group, Inshuti has calmed down and covers much smaller distances. The group is very compact and the three females are peacefully living together.
For a while, Inshuti showed particular attention to the oldest female, Shangaza, and often followed her, making sexual vocalizations and displays. However, Shangaza has tried to avoid his rough approaches and his interest in her has decreased. The current focus of Inshuti's interest now seems to lie with the much younger females, Ruhuka and Taraja. Ruhuka, who has been with Inshuti the longest, is often in close proximity to him and during resting time is frequently in physical contact, either grooming him or simply sleeping next to him.
Submitted by Veronica Vecellio, Karisoke Research Center.