As Fossey Fund trackers and scientists observe closely the remaining members of Bwenge’s group (since leading silverback Bwenge died on Oct. 1), the situation of the group continues to change. Even as elder female Maggie continues to lead the group (in itself a remarkable occurrence), gorillas from other groups and a lone silverback have now been observed mixing with the group or with certain members.

After facing a lone silverback on Oct. 12 and disappearing until Oct. 16, a separate team of Fossey Fund trackers has been following 6-year-old subadult male Ntaribi. The young gorilla’s tracks were spotted near Bwenge’s group, and he appeared to be on their trail. Yesterday, trackers were pleased to announce he had rejoined the group!

Ntaribi’s return to Maggie and the rest of Bwenge’s group was a relief for Fossey Fund staff because the subadult gorilla was too young to be travelling alone. He had been covering large distances by himself and appeared stressed when trackers first saw him on Oct. 16.

Yesterday, trackers also reported that female Faida, 14 years old, from Bwenge’s group, had transferred after interacting with a well-known lone silverback, Inshuti. Faida was followed by her 3-1/2-year-old infant Susuruka. 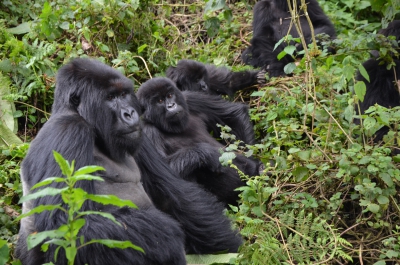 Today our trackers reported a whole new set of circumstances, some of them surprising and not yet fully understood. Most interesting was the appearance of silverback Wageni (who normally lives in Ugenda’s group), showing up in the remnants of Bwenge’s group. The group was calm in the morning but by afternoon there was some aggression by Wageni toward Maggie. Maggie, with support from the youngsters, held her own. In addition, infant Susuruka was back in the group, while her mother, Faida, was seen separately with silverback Inshuti.

The trails of the groups since yesterday give us some clues as to what may have happened, showing that Maggie with Bwenge’s group intersected with Faida (who still had Susuruka with her) and Inshuti. They then probably got near Ugenda group, which is when they were joined by silverback Wageni.

Fossey staff are hoping for a good, stable situation for all of these gorillas but stay tuned, because more changes can always happen.