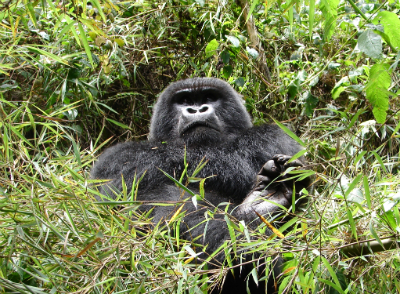 Winnie Eckardt, Ph.D., a researcher for the Fossey Fund's Karisoke Research Center, was shocked to discover blackback Irakoze, who has not been seen for almost three months, amidst Pablo's group during her data collection session in the Mapfundo area of the bamboo zone this morning. Eleven-year-old Irakoze was one of the three bachelors that linked up and left the group on August 16th, vanishing without a trace. Field staff suspects that the other two silverbacks, Twihangane and Gushimira, may reappear shortly, considering that Irakoze seems to want back in to Pablo's group.

Eckardt reported that the large group of mountain gorillas were widely spread out through the bamboo and initially, Irakoze seemed to be peripheral to the group. However, around 12:15 p.m., he began to move toward the center of the group, possibly seeking protection from dominant silverback Cantsbee. Musilikale, a 13-year-old silverback, had already spotted the deserter and was mounting a vigorous display against him.

Irakoze's first two interactions with Cantsbee were peaceful and uneventful. Irakoze followed Cantsbee for a brief time, hoping to find safety in his company. However, when the dominant male turned to move up the hill with several group members in tow, he suddenly spun on his heel and ran back down towards Irakoze, pinning him down on the forest floor and biting him on his upper back. The field staff suspects that this behavior was intended to establish his dominance. "The aggression did not mean to hurt him but was just intended as a reminder of who is in charge" said Fossey Fund Gorilla Program Manager Veronica Vecellio. Trackers did not see any distinguishable wounds on Irakoze’s shoulders or back after the incident.

Quite a few group members were not located today during the observation period: silverbacks Gicurasi and Kureba, blackback Urugwiro, subadult Agahozo, female Mudakama and infant Teta. The Fossey Fund field staff suspects that the individuals were not located because of the dense vegetation in the area. An extra team will be dispatched tomorrow morning to examine the surrounding area and search for the missing gorillas.

Gicurasi, Cantsbee's second in command, is not likely to be pleased with the new male addition to the group. The Fossey Fund staff is anxious to see whether Irakoze will be allowed back into his former group. With the support of Cantsbee, his chances look good. However, with silverbacks Musilikale and Gicurasi campaigning against him, his fate is still undetermined. More to come soon!