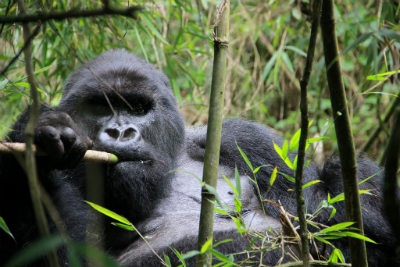 During bamboo seasons, the mountain gorilla groups monitored by the Dian Fossey Gorilla Fund often flock to the bamboo zone to snack on tasty bamboo shoots, which are an important part of their diet. The bamboo zone in Volcanoes National Park is located in a limited belt along the edge of the park, adjacent to human communities. Because the bamboo zone is so close to the park’s limits, during the bamboo season the gorillas will often venture outside of the protected area of the park in search of additional bamboo.

At this time of year, with the rainy season coming to an end, the spring bamboo season is now underway, and Fossey Fund trackers, scientists and other staff are carefully and closely monitoring gorilla group movements around the park borders, since extra actions are needed when gorilla groups go outside the park.

For some reason, this season there are very few bamboo shoots overall. This means that the gorilla groups have had to expand their search, including further away from the park. This also puts them in the area that includes eucalyptus trees grown by local communities. The gorillas enjoy eating certain parts of these trees as well, which ends up causing great damage and puts them in conflict with local communities.

On May 21, gorilla group Titus went farthest from the park, about 1 kilometer away, and spent 2-1/2 hours outside the park that day. This obliged our trackers to “herd” them back into the forest, which can cause stress to the gorillas as well as danger to them and the trackers. Several other groups spent time out of the park during the same week.

To learn more about this phenomenon, last year the Fossey Fund’s biodiversity monitoring and research program coordinator — Deogratias Tuyisingize — launched a study of bamboo phenology in Volcanoes National Park. Phenology is the scientific term used to describe the relationship between climatic conditions and biological occurrences.

The objective of the study is to assess and monitor the density and growth of bamboo throughout the park, and the correlation between bamboo and many natural conditions such as elevation, rainfall and temperature. In addition, the study aims to better understand the relationship between the bamboo seasons and gorilla ranging patterns. Data is now collected twice a year during the biannual bamboo seasons, which coincide with the high and low rainy seasons, for at least five years. During each bamboo season, a three-month-long period of assessment and data collection takes place, in which more than 80 plots strategically located throughout the park are surveyed every two weeks.

Last year we saw an unusually large number of gorilla groups leaving the park during bamboo seasons, in one case even setting up their night nests and sleeping outside the park. This puts an extra burden on our staff, since gorillas out of the park need to be monitored around the clock to prevent any dangerous interactions.

We hope that the results from the bamboo phenology project will provide much needed information about why the gorillas are behaving in this way, and better prepare us in the future to deal with the issue as well as with the communities that are sometimes affected.