It's not easy counting gorillas: Our staff shares experiences from gorilla census 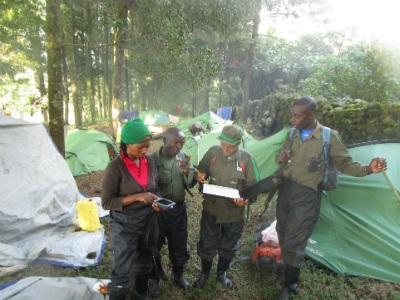 Since October, the Dian Fossey Gorilla Fund has been assisting with the 2015 census of the Virunga mountain gorillas, a large collaborative project that involves teams and experts from many organizations and several countries. The census involves counting all the mountain gorillas in Africa’s Virunga massif, which straddles the borders between Rwanda, Uganda and the Democratic Republic of Congo.

Last month, the second part of the first “sweep” of census field-data collection was completed. This was also the third component of census participation for two Fossey Fund staff based at the Karisoke Research Center: Research Assistant and Conservation Education Leader Maurice Ngiramahoro and Research Assistant Gudula Nyirandayambaje. So far, training and two sets of data collection have left these research assistants with new knowledge and skills—and with some unexpected insights.

Conducting the census requires specific skills and a high level of physical effort. Every team member involved was trained to follow predetermined routes (“recces”) in the forest, to use electronic data-collection tools, identify gorilla trails and nests, collect important biological samples, and more. Although all members were trained specifically for the census, individuals entered the process with varying backgrounds. For Gudula, who was just promoted from data entry assistant to research assistant in September, it was her first time practicing some field research skills, as well as her first time camping in the forest.

“During the gorilla census, I saw a gorilla nest on the first day and learned how to differentiate old nests from new ones. Before the census, I was not able to distinguish gorilla tracks from those of other animals. Now I am,” she says.

Other skills she gained included learning how to use Cybertracker (electronic data-collection software for use in the field), using a compass and special maps, and following communication protocols.

Apart from the expected new, census-specific skillset Maurice and Gudula gained, both encountered other interesting experiences. Team members camped in the forest throughout each sweep, often during harsh weather conditions, with notably heavy rains and cold temperatures. Participants came from Rwanda, the Democratic Republic of Congo and Uganda, so many different languages were spoken among team members. 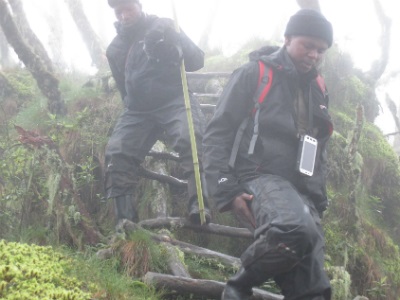 Maurice says being exposed to different cultures through language, behavior and food, and making new friends, was something that he gained from the experience. “I learned how to adapt to different languages by considering the many factors that influence the effectiveness of my communication,” he says.

Communication proved to be essential in many ways, not only for moving through the forest, but even for cooking. Gudula explains that her team organized into two groups according to language, in order to avoid any confusion with cooking. Making hearty meals and finding water were imperative for the amount of physical activity, which involved hiking through the mountainous terrain and steep ravines. Indeed, due to the intense hiking, Maurice lost 10 pounds.

At times, there were problems getting clean drinking water as well. The cooks in the teams boiled water from rivers, which was black and contained small particles. Most campsites flooded due to the heavy rains frequent in this area during this time of year, but there was also a campsite near Muhabura where the rivers were dry.

During heavy rains, equipment (such as GPS units and batteries) needed to be kept dry and warm, which was solved by keeping them underneath clothing. “The area was very cold and wet, so after working in the forest, we had to either stay in our tents or around the fire in order to stay warm,” Gudula says. 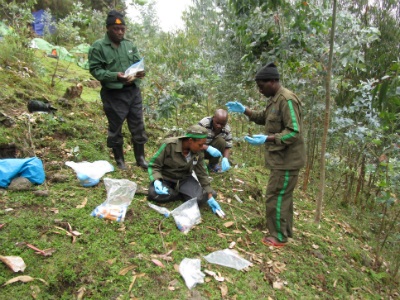 Despite various hardships that might discourage most individuals, Gudula and Maurice’s team was able to overcome discomforts and complications by working together. “During the gorilla census, I created friendships with my team members and now have over 20 new friends,” Maurice says.

As the census progresses to its final steps, the current number of mountain gorillas will eventually become clear. A second sweep of data-collection will take place in early 2016 and then there are several stages of analysis needed to complete the final report.

The last census, completed in 2010, showed 480 mountain gorillas in the Virungas. Everyone hopes the new number will be higher or at least stable. Maurice says he expects to find an increased number of gorillas.

“The gorilla census is really very important, and I gained a lot from it,” Gudula says. “In coming years, I wish it will happen again and that I will be able to train new team members.” Both Gudula and Maurice extend their appreciation to the individuals who trained them and hope that they can participate again in the future and take on leadership roles.