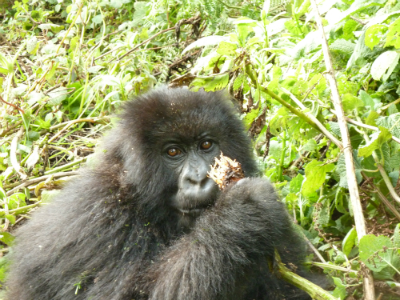 This morning, the Kuryama group’s trackers found juvenile male Haguruka caught in a snare. This is the second time a juvenile from Kuryama’s group has been caught in a snare in 2013. Juvenile female Dukore was also caught in February.

The rest of the group was very stressed and crowded around Haguruka, even pulling on him. The trackers became very concerned, as young gorillas can sustain serious injuries when adults try to free them from snares by pulling on their limbs. Fortunately, they were able to intercede to cut the rope where it was attached to the stake that anchored the snare, but a long piece still remained around Haguruka’s right wrist. Fossey Fund, Rwandan Development Board and Gorilla Doctors staff prepared to intervene to remove the rope from his wrist, but in the meantime, Haguruka managed to remove it himself.

Fortunately, Haguruka does not appear to have been injured and the rest of the group has calmed down now.