One of Two Juveniles in Titus's Group Found Dead 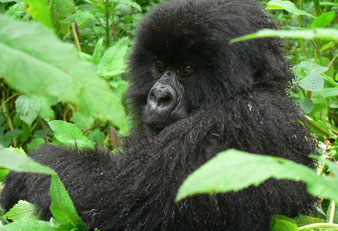 One of the two juveniles in Titus’s group, 4-year-old Ihumure, was found dead on the morning of September 18, four days after the death of his protector. Ihumure had spent his last days with the four surviving males of the group, in particular the blackback Turakora, who took care of him by sharing his nest and holding him during the daytime.

The group has been very stressed after the death of the dominant silverback. Female Tuck moved away with her son Segasire to avoid the silverback Rano, who reacted by displaying and vocalizing continuously. However, the group members did not move far from Titus’s body and visited it often until it was removed, sitting nearby, looking at and touching the body. Researchers felt this behavior demonstrated a degree of compassion rarely observed in animal behavior. 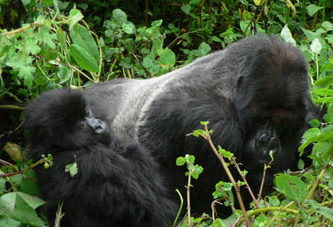 Ihumure remained close to Titus until the body was removed and soon began to show signs of weakness. Veterinarians from the Mountain Gorilla Veterinary Project darted him with a deworming medication and an antibiotic, but his health was already too compromised. Karisoke staff believe that depression following the loss of Titus played a significant role in Ihumure’s decline.

Preliminary results of a necropsy conducted on Ihumure showed an internal hemorrhage that may have been caused by a bad fall or aggression during the weeks when the group was quite stressed by challenges to Titus by Rano and travelling continuously.

Ihumure was born on New Year’s Day, 2006 to female Bukima, a member of Beetsme’s group. When Beetsme’s group split in 2007, Bukima and the infant Ihumure followed Titus. Ihumure was always very dependent on his mother, rarely moving far from her even when he reached an age when mountain gorilla infants normally take their first steps alone to explore their environment. Tuck’s son Segasira, the same age as Imuhure but much more independent, often encouraged Ihumure to leave his mother so they could play together, and the two infants soon became best friends. The first three years of Ihumure’s life, with his mother and Segasira’s companionship, were very happy.

In March 2009, after an interaction with another gorilla group, mother Bukima transferred to the other group, leaving 3-year-old Ihumure behind. Even though Ihumure had been almost completely weaned by then, his dependent nature prevented him from reacting well to his mother’s premature departure.

He was well physically, but his mood was seen to decline. He stopped playing with Segasira and approached the elder Titus for protection. Titus, with his gentle nature, adopted the infant and gave him the support that he needed. Titus and Ihumure moved together after that and shared the same night nest. During rainy days Titus kept Ihumure warm by holding him in his arms.

After the silverback Rano began to approach the group in late August and they travelled nonstop in an attempt to evade him, rarely pausing even to eat, Ihumure started losing strength. The group was also stressed by several interactions with other groups. As the post mortem analysis revealed, Ihumure may also have been a victim of aggression from another gorilla.

The tragic events of the last few weeks revealed an important aspect of gorilla behavior. Titus’s group members showed visible emotional involvement by remaining near Titus’s body, approaching him and touching him, and the blackbacks supported Ihumure during his final days.