Juvenile Inkumbuza – Which Group is Home? 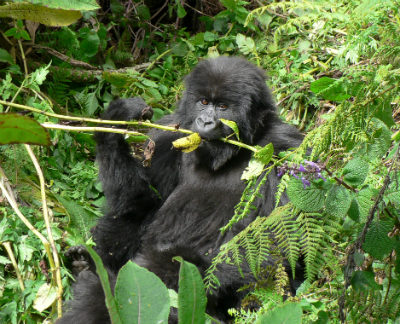 Our trackers at the Karisoke™ Research Center in Rwanda have been observing an interesting phenomenon with 5-year-old male mountain gorilla Inkumbuza. During 2010 he transferred between groups a total of 13 times and still has not decided which group he wants to belong to. Most recently, he moved back to Ugenda’s group, on Dec. 29.

Silverback Urugamba formed his own new group when he left Ugenda’s group in January 2010. His new group included four other individuals from Ugenda’s group, including Inkumbuza and his mother Pasika. Urugamba’s small group grew to six members when Pasika gave birth to Turate in May, the new group’s first birth. Since then, Pasika has focused her caregiving on her newborn, spending less time with older son Inkumbuza.

Although Urugamba’s group still ranges in the same area used by Ugenda, it has become gradually more independent. The two groups travel and spend the night separately. However, because of the limited area they share, they came close to each other peacefully several times during the year. It was on those occasions that the young Inkumbuza moved from one group to the other and back again. After each transfer he remained in the group for a few weeks before changing again when the two groups were not far apart. As a result, he has become unusually independent for a juvenile gorilla his age, and is so fearless that he doesn’t hesitate to travel up to 500 meters alone in the forest. 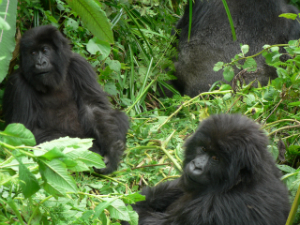 It is not known why or how Inkumbuza decides when it is time to go, but what is clear is that he has a very good time in both groups. Inkumbuza is an extremely social and playful young gorilla, and he still enjoys being cuddled and groomed by his mother and resting next to her.

All of the gorillas in these groups seem to appreciate the joyful presence of the young Inkumbuza and he is quite welcome in both groups. The presence of five playmates (juveniles and infants) attracts Inkumbuza to Ugenda’s group, in which he spends hours playing with all his young friends. On the other hand, the presence of his mother Pasika is a decisive factor that attracts the still-young male back to Urugamba’s group.