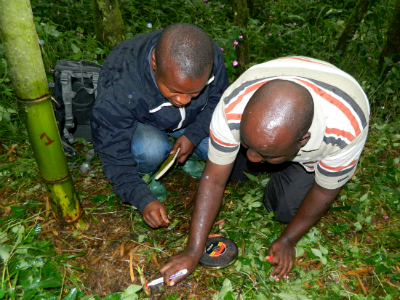 Deogratias (Deo) Tuyisingize, the Fossey Fund’s biodiversity research program manager at our Karisoke Research Center in Rwanda, recently traveled to one of our Congo research sites to help start a new scientific project. This cross-border collaboration is part of a larger “science without borders” initiative supported by the Richard Lounsbery Foundation, to help scientists in Rwanda and the Democratic Republic of Congo develop autonomous research and international collaboration skills.

The goal of the project is to initiate a long-term transboundary collaboration and also to share and analyze data that will help shed new light on some of the factors responsible for the differences we see between mountain and Grauer’s gorillas. To kick off the project, seven Congolese scientists came to Karisoke in March for a workshop.

Then, in April, Tuyisingize traveled to Congo’s Kahuzi-Biega National Park, which is home to the only habituated group of Grauer’s gorillas, to launch a study on the growth patterns of bamboo, which is a key gorilla food species. This type of work is something he has conducted for years in Rwanda’s Volcanoes National Park, where the mountain gorillas live, and information gleaned from the Congo study will be interesting to compare. The study may later be expanded to other gorilla food plants in Congo, if funding is available.

While at Kahuzi-Biega, Tuyisingize trained colleagues, including the assistant warden in charge of research and monitoring, Célestin Cimanuka, and field assistant Munganga Matabaro David, from the Congolese wildlife authorities (ICCN), on how to construct bamboo plots for study and on data collection and data-entry skills, as they explored the bamboo zones in the area together. This project is expected to continue for five years.

Tuyisingize says there were many remarkable things about his visit and the bamboo types he found. Some bamboo specimens he found there measured more than 20 centimeters in diameter, much larger than what is found in Rwanda. 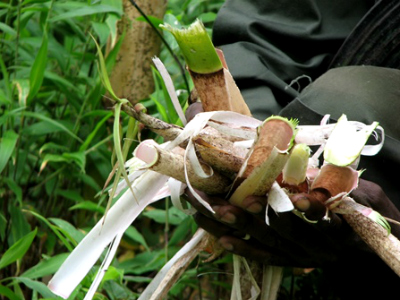 “It is fascinating to compare the biodiversity in Kahuzi-Biega with that in Volcanoes National Park. Gorillas are known to share some key plant food species, such as bamboo, but overall their diet is very different,” Tuyisingize reports. This is true even though these forests are at the same altitude and just 100 kilometers away from each other. Some plants that are present in both areas are consumed by the gorillas only at one area, so this study and other similar ones will help us understand the differences between these forests, as well as between these two gorilla populations.

Tuyisingize will return to Kahuzi-Biega in October to evaluate the progress of the work and to see what challenges may have arisen. He will also work on finding additional grants to support studies of other key gorilla food plants, since they all have a critical influence on the gorillas’ distribution and many aspects of their welfare.

In addition to the bamboo phenology project, Tuyisingize will be also be a co-investigator on a mammal survey, another project supported by the Richard Lounsbery Foundation, and led by Escobar Binyinyi, the Fossey Fund’s field research manager at the Biruwe-Nkuba research and conservation areas. After these pilot biodiversity projects, the plan is to develop more collaborative projects, such as surveys of birds, monkeys, and amphibians, implemented jointly by the Fossey Fund in Rwanda and Congo, along with the Congolese wildlife authorities, he says. Doctoral and post-doctoral studies in the two parks are another potential addition to such work.

According to Urbain Ngobobo, the Fossey Fund’s Congo program director: “Grauer’s gorillas, especially those from the lowland sector, are the least-known compared to other gorilla subspecies. These cross-border collaborations are a unique opportunity for African scientists to share their experiences, to carry out their research in different landscapes and contexts, and with various species.”

“The research projects are one of the best ways for African researchers to study Grauer’s gorillas in both the high- and low-altitude sectors, and to come up with answers about their ranging patterns, feeding patterns, impact of the altitude, and other important information,” adds Ngobobo. “In addition, the multi-national African research teams boost the research domain for the Fossey Fund in all three of its current work sites.”

For Tuyisingize, the trip to Kahuzi-Biega was also his first opportunity to see Grauer’s gorillas. While there, he saw a solitary male named “Mugaruka,” who was at the edge of the park.

“I was impressed with how similar he is to the mountain gorillas I am used to seeing in Volcanoes National Park,” he says. “It shows me how important it is to conduct scientific research, protection and conservation with these gorillas, and to do comparative studies as well. This is the second subspecies of gorilla I have ever seen in the wild. I hope one day to see the others too — Cross-River gorillas and western lowland gorillas.”