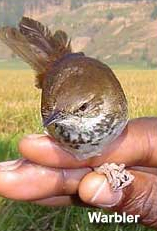 While Karisoke’s ornithology program is still a fledgling compared to some of the center’s other research programs, it has already won recognition within Rwanda’s birding community and has worked in partnership with Rwanda’s Association for the Conservation of Nature and other groups. Staff ornithologist Claudien Nsabagasani has also established a relationship with the Sutton Avian Research Center and hopes to create many more partnerships between Karisoke and international birding organizations.

Claudien has been studying birds at Karisoke since 2004, primarily researching the Grauer’s swamp warbler, an endangered species unique to the marshes of the Albertine Rift. He started out as an intern at Karisoke while an undergraduate at the National University of Rwanda, and was hired as the center’s resident ornithologist in 2005. Now he trains field staff for Rwandan tourism and for research on bird identification and ecology, and helps undergraduate students with their research projects. In the future, the ornithology program will continue research on the Grauer’s swamp warbler, and study other threatened birds endemic to the Albertine Rift. 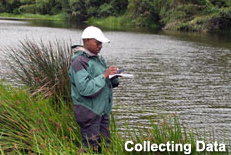 Lack of knowledge, according to Claudien, is one of the biggest obstacles to bird conservation. “The people in the local area still have very little knowledge about the importance of birds,” he says. Human activities such as cattle grazing and grass cutting greatly reduce the habitat for most birds. For this reason, the program is also dedicated to public education. For the second year, Claudien has organized observances of World Migratory Bird Day. He also celebrates the World Bird Festival by giving presentations about birds to primary school students.

The future of bird conservation in Rwanda is hopeful, since birding is a popular tourist attraction. Claudien hopes to continue his studies, gain more training in birding techniques, and help the program evolve through collaboration with other organizations. He has already written a training manual on the birds of Volcanoes National Park (some 144 species) and how to identify them, and has published information about the swamp warbler in Birdlife International.