Felix Ndagijimana was appointed as the first Rwandan director of the Karisoke Research Center on Jan. 16, 2012 — a historic moment on a historic date, marking what would have been Dian Fossey’s 80th birthday. Three years later, the Fossey Fund commemorates the birthday of our founder and the appointment of the Karisoke director. In tribute to Dian Fossey, here’s a special Q&A with Felix: 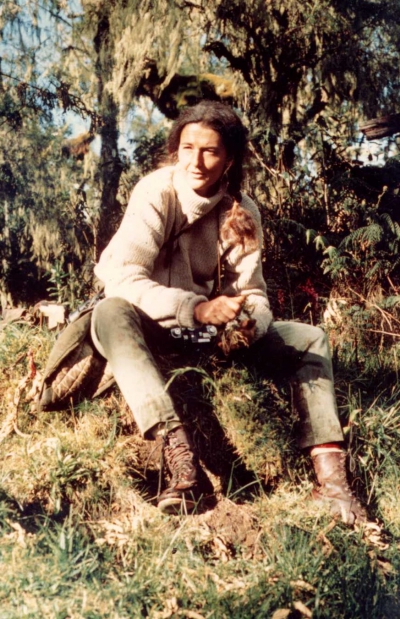 How did you learn about Dian Fossey and the Dian Fossey Gorilla Fund?
I first learned about Dian Fossey after she had been murdered, from a magazine for kids in primary school that had a story about mountain gorillas. I was curious to know more about who she was, why she was doing what she was doing and why she had been murdered. All these questions were answered a few years later when my family and I saw the movie “Gorillas in the Mist.” Around that same time, I learned about “The Digit Fund.” It wasn’t until later that I found out that the Digit Fund had been renamed the Dian Fossey Gorilla Fund International and that this organization has continued the work of Dian Fossey.

How has Dian’s legacy lived on 29, years later?
The work started by Dian Fossey to save the mountain gorillas has not only continued after her death but it has also expanded to save other species of gorillas in Africa. With regard to mountain gorillas, their numbers continue to increase and this is very encouraging. Some of the gorillas that Fossey habituated for research are still alive today and some, such as Cantsbee, have been leaders of their groups for many years and have taught us so much about gorilla behavior.

The involvement of the local community in the conservation of gorillas has had a positive impact on both people and gorillas, hence the importance of the Fossey Fund’s work with communities living adjacent to forest where gorillas live in Africa. The Fossey Fund continues to provide training and educational opportunities to Rwandans.

What do you feel Dian would think of where the Fossey Fund is today?
I think she would be very proud to see that the work she started almost 50 years ago to study and protect the mountain gorillas has continued and that the Fossey Fund (formerly her Digit Fund) has grown into this unique organization that has kept her dream alive. I think she would also be amazed to see the daily operations to monitor and protect gorillas in Rwanda and how the team at Karisoke has grown to 105 full- time staff members.

How do you view the significance of your role as the first Rwandan director of the Karisoke Research Center?
I am very honored to be the first Rwandan to lead the Karisoke Research Center, a world-renowned research institution with a rich history of research and conservation achievements that also provides training and educational opportunities for Rwandans. I am incredibly lucky to be doing what I am doing and to be working with such a dedicated team of staff at Karisoke. I am very proud of the incredible work done by everyone at Karisoke.

If Dian were alive, what would you want to show her about the Fossey Fund’s work today?
The past year was full of changes within the gorilla groups we monitor. The changes — such as the formation of new groups, transfers and expansion of home ranges — come with challenges. So if Dian were alive today, the first thing I would show her is the work done by everyone to monitor and protect the gorillas, despite many challenges we faced in 2014.

I would also show her the recently built Bisate Learning Center. This is a project funded by Partners in Conservation (PIC) and the Fossey Fund to build a library and provide computers for Bisate primary and secondary schools, with the goal of providing better learning conditions for children living near the park. I would also tell her about the impact of the Fossey Fund’s training programs, which benefit undergraduate students from the University of Rwanda.

Finally, I would show Dian the work of the Fossey Fund in the Democratic Republic of Congo, and how the work she started in Rwanda continues to inspire people in Africa.