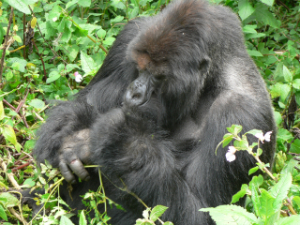 BBC crews spent more than 6 months in the field with staff from our Karisoke™ Research Center in Rwanda, filming over the course of one year, and following the gorilla groups that the Fossey Fund has monitored for more than 40 years.

The filming also covers mountain gorilla habitat in Uganda and Democratic Republic of Congo, which, together with Rwanda, contain the entire habitat for the endangered mountain gorilla.

This intimate and personal portrait of mountain gorilla life includes the deadly encounter between one of the world's best loved gorillas, Titus, and his own son, Rano, in what has to be one of the natural world's greatest clash of the Titans. The elderly Titus, who was the subject of his own television documentary ("The Gorilla King," by PBS Nature), faced a challenge to the death for control of his group….

Program 1: "Kingdom in the Clouds"

This first part of the BBC mountain gorilla trilogy reveals a species in intensive care, with scientists, veterinarians and trackers all working alongside each other to conserve the last 700 mountain gorillas on earth. BBC crews follow Cantsbee, the dominant silverback of the largest-known group of mountain gorillas, as he leads his group down to the bamboo zone right on the edge of the park. But dangers lie here and his sister gets caught in a poacher's snare.

Battle scarred and unappreciated by his group, has Ugandan silverback Marembo's desperate bid for supremacy finally come to an end? In this, the second of three programs, the plight of a silverback leader is revealed as being one of both real hardship and great reward. In Rwanda, famed silverback leader Titus finally meets his match – his own son, Rano. But just how far did Rano go to take his father's crown? The BBC caught on film an epic battle for control.

Program 3: "Safe in Our Hands"

How did silverback Rano hold on to the group he fought so hard to win? Tuck, the only female, continued to spurn his advances as he now he faced his biggest challenge yet — a potentially fatal encounter with a larger, more powerful group. In the third and final program, the BBC looks to see what the future holds for the remaining few hundred mountain gorillas, and what is being done to try and make sure humans and gorillas can both continue to co-exist on the fragile slopes of this mountain kingdom. 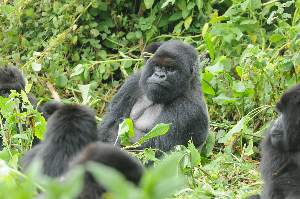 Stay tuned for information on future airings of this program in the U.S. and elsewhere.