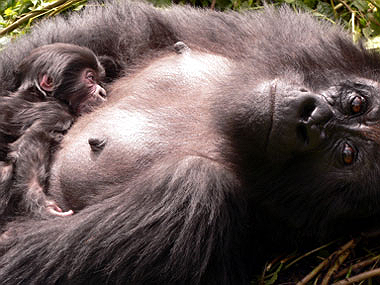 In gorilla news this month Umuco, in Pablo's group, gave birth to her third infant on May 12. In December 2004, Umuco's second infant died of unknown causes but Iyambere, her first infant, is now a thriving 5 1/2-year-old male. So there is cause for a double celebration at Karisoke this month, as this now brings group Pablo to an unbelievable 61 individuals.

Karisoke researchers have begun to train a new data technician to work with Pablo's group. This is necessary in order to collect sufficient data on this increasingly enormous group. An experienced tracker, having worked for Karisoke with Pablo's group for five years, Francois Xavier Ndungutse is enjoying his new responsibilities and should prove to be an excellent data collector.