The Fossey Fund’s Karisoke™ Research Center continues to attract scientists from around the world to study the diverse species found in Rwanda’s Volcanoes National Park. The mountain gorilla groups that are habituated to the presence of observers and whose behavior has been recorded for more than 40 years are of particular interest, but research is also underway on other mammals, plants, birds, insects, reptiles and amphibians. Recently, three Karisoke-based research teams have presented their findings in scholarly journals. 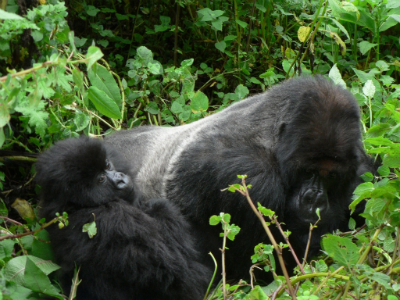 In one study, in the American Journal of Primatology, Tara Stoinski, Ph.D., the Fossey Fund’s McGrath Chair of Conservation and Science, and her colleagues Stacy Rosenbaum and Joan Silk, Ph.D. from UCLA, analyzed relationships between adult male mountain gorillas and immature gorillas in three multi-male groups, to determine behavior patterns and their possible functions – that is, their value to the individuals involved. The interactions included activities such as play, grooming and nest sharing, most often initiated by the youngsters but accepted by the adults.

In the past, most gorilla groups studied had included from one to three adult males, but the recent Karisoke research looked at groups that included six to nine adult males, both blackbacks and silverbacks. They observed that even with more male partners to choose from, the immature gorillas tended to spend the most time with the dominant silverback, and that the interactions were most numerous while the infants were becoming independent from their mothers but still needed protection – between 1 and 3 years of age.

“Male gorillas play a critical role in the protection of infants,” the report notes. The researchers concluded that the adults’ behavior likely represents paternal investment by the dominant male, although there is some evidence that relating to the youngsters might also help subordinate males gain opportunities to mate with their mothers. The next step will be to layer immature-infant social behavior with paternity data to see if males preferentially interact with their offspring, as has been observed in some other primate species.

Another study, in The American Naturalist, reviewed the way wild primates cope with variation in their environments. The research represents an impressive collaboration by scientists at seven long-term primate field sites. The authors, including the Fossey Fund’s Dr. Stoinski, found that primates as a group show greater constancy in survival and birth than any other animal group (ungulates, birds, amphibians, reptiles) studied so far. The authors hypothesized that some of the defining characteristics of primates – sociality, large brains and flexible diets – may have contributed to this ability to withstand environmental variation.

“It would be very interesting to know if other animals that possess features of primates – especially large brains and sociality – also show constancy in survival and reproduction; elephants and dolphins come to mind,” said co-author Susan Alberts, Ph.D., of Duke University. Such features, which were shared by early humans, are likely to have contributed to their success as well. The researchers note that despite the primates’ ability to cope with natural environmental variation, they are not able to overcome severe environmental change, such as widespread habitat destruction. 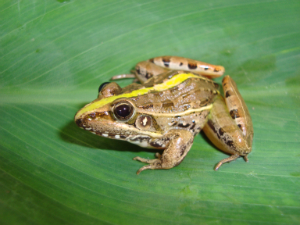 The third publication, on www.checklist.org.br, reports on a survey of the types and distribution of amphibians and reptiles in Volcanoes National Park. Corey Roelke, Ph.D., the senior author, was based at Karisoke while collecting these data as part of his dissertation.

“Accurate data concerning species distribution is a necessary component of biodiversity conservation,” the authors note. They also observe that although the variety of amphibians and reptiles in Volcanoes National Park is not as great as in some less-elevated areas in the Albertine Rift that have a more favorable climate, “the Virunga Mountains ecosystem in Rwanda is amazing for its unique combination of geologic, historical, and biological wealth and stands as a model for conservation biology.”