Dr. Dian Fossey’s love for the Christmas season was well known by colleagues and friends here in Rwanda. Hanging a Christmas wreath that read “Howdy” on her cabin door, she opened up her home in the Virunga rainforest every December to host an elaborate Christmas party for her fellow researchers, field staff and their families. The guests feasted alongside one another and shared mugs of "urwagwa," the local banana beer. Fossey decorated the entire Karisoke campsite every year, complete with candle-lit trees and tinfoil and popcorn garland. Standing tall in Fossey’s cabin was the “big tree,” with mounds of beautifully wrapped gifts (gathered from her trips overseas) for her staff and their families. Their celebration would continue late into the night. Christmas carols, sung in Kinyarwanda, French and English, would ring out in the cool night air of the rainforest and her field staff would perform their own song-and-dance routines, accompanied by traditional drumming, describing the events of the previous year with the mountain gorillas. 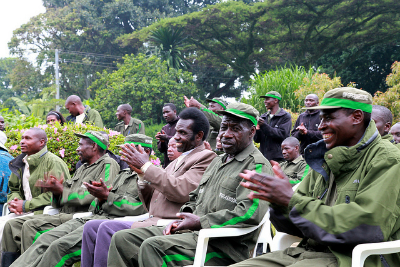 The Dian Fossey Gorilla Fund International continues to honor Fossey’s love of the holiday season and every December, throws a holiday celebration at the Karisoke Research Center. Today, more than 110 Fossey Fund trackers came down from the Volcanoes Park to Ruhengeri (the current location of Karisoke) to celebrate with the researchers and administration staff. Fossey Fund Karisoke Deputy Director Felix Ndagijimana delivered an uplifting and inspirational speech reflecting on our growth in 2011 and future plans as we move into the new year. He commended everyone on all of their hard work in 2011 and passed a message of best wishes for the coming year from the Fossey Fund’s Atlanta headquarters. Field Data Coordinator John Ndayambaje spoke on behalf of the trackers and expressed his gratitude to the organization and their collective enthusiasm moving into 2012. He concluded with a promise that all of the trackers would continue their hard work and maintain a strong commitment to the Fossey Fund’s objectives and goals.

Following the speeches, the music was turned up and everybody met on the grassy dance floor. True to tradition, there was lots of music, food, drinks, laughing and dancing. Dr. Fossey would have been very proud.