Karisoke Research Center staff, other DFGFI scientists, and several students from the Tayna Center for Conservation Biology (TCCB) in Congo, were invited to share their research on gorillas and related topics with fellow scientists from all over the world at the International Primatological Society’s convention in Edinburgh, Scotland this August.

Three of the students had studied monkeys that inhabit the Tayna Nature reserve, a unique community-based reserve in Congo that DFGFI closely works with. Luc Mumbure Lango submitted his observations on the feeding habits of redtail monkeys; Jeanny Kahindo Misave created a poster on plants eaten by l’Hoest’s monkey; and Honore Kambale Masumbuko created a poster on the social behavior of the owl-faced monkey. A fourth student, Jackson Kubuyaya Mbeke, attended the conference, with support from DFGFI, to receive special training in the care of captive primates. 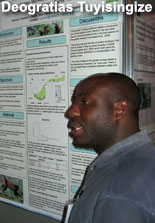 Karisoke Research Assistant Deogratias Tuyisingize won honorable mention in a competition among students and young scientists, for his poster on the endangered status of golden monkeys. His work was ranked sixth among 97 entries. He also received a scholarship from the Wenner Gren Foundation to support his participation at the conference. Dr. Kate Fawcett, Karisoke director, contributed to the study.

“I am delighted that these young scientists had this opportunity to make their work known to the international scientific community,” says Dr. Alecia Lilly, DFGFI’s vice-president of Africa programs. “TCCB and Karisoke are training a new generation of African conservationists. They are taking ownership of a rich heritage that includes not only the gorillas but also many other rare species of animals and plants found in the region.” 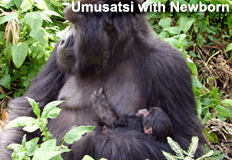 Dr. Tara Stoinski, DFGFI’s Pat and Forest McGrath Chair of Research and Conservation, presented a study of the factors that cause almost half of male mountain gorillas to leave the groups in which they became a silverback. The reasons may include limited access to females and the absence of the male’s mother in the group, but other factors may be involved. Five other researchers from Karisoke and Zoo Atlanta worked with Dr. Stoinski on the project.

Former Karisoke Director Dr. Dieter Steklis and former staff researcher Netzin Steklis discussed the costs and benefits of long-term research for conservation of mountain gorillas, based on the Karisoke experience.