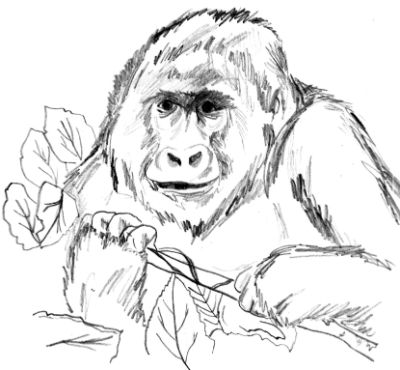 The Fossey Fund’s Karisoke™ Research Center’s Conservation Education Program is continuing to move forward, full steam ahead. Besides hosting scores of undergraduate students from the National University of Rwanda, introducing them to the country’s national treasures and providing an opportunity for the students to explore scientific research in the field, the conservation education program coordinator, Joseph Karama, has been hard at work on a myriad of other projects this spring.

Karama is on the home stretch of his two-year Master’s program in zoology at Miami University. As a follow-up to his 2011 summer field course in Indonesia, the program required him to complete an “Inquiry Action Project” which would involve the community and promote conservation education, including both an “inquiry” and an “action” component. The eight-minute video that Karama created as his project features interviews with local people living near the gorillas’ habitat and with park wardens, covering the human/wildlife conflict; crop raiding by the gorillas; benefits and costs of living near the park; threats to the park; and possible solutions.

Through this video, Karama said, “I set out to answer two questions: Do conservation videos improve people’s knowledge and attitudes towards conservation, and do the videos create a desire to take action for conservation?”

The short video is scheduled to be screened in eight locations around Volcanoes National Park throughout the month of June, preceding a showing of the movie based on Dian Fossey’s book, Gorillas In The Mist. Karama has tested his video on a sample population and administered a survey before and after the screening, seeking to evaluate the effectiveness of video as an educational tool. The before and after questions in the survey showed a knowledge increase of 8-62% following the screening, relating to the greatest threats to the mountain gorillas; use of the park’s resources; and conservation efforts.

Karama has also provided copies of “Primates of Rwanda, an ABC Coloring Book” to children who live near the park. The book presents information about the animals’ habitat, diet and natural history in simple English using an alphabet format, complete with pictures. Karama distributed the books to 1,500 third grade students in six primary schools in early June. The students are free to color, draw and paint in the books and are encouraged to take them home and share them with their family members and friends.

“Primates of Rwanda” originated with Karama’s 2009 visit to the Jane Goodall Institute’s (JGI) Roots and Shoots youth program in Uganda. He saw a coloring book about Uganda’s primates and asked the author, JGI volunteer Jules Torti and Debbie Cox, JGI’s Uganda director at the time, if one like it could be produced for Rwanda. Using information from Karama, the designer sent a draft which was edited by Dean Jacobs, the Fossey Fund’s field communications officer that year, Karama, Karisoke Deputy Director Felix Ndagijimana (now director), and then Karisoke Director Katie Fawcett, Ph.D.