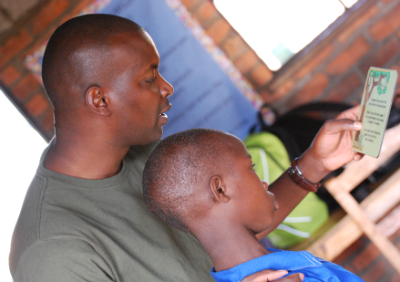 Joseph Karama, the Fossey Fund’s Conservation Education Program manager, is producing a short film to be used both in his work with the Fund and for his master's program in conservation education at Miami University. Karama and Field Communications Officer Jessica Burbridge have been filming around Volcanoes National Park. They recently hiked through the farm land surrounding the park to interview people who may have encountered the gorillas during one of the gorilla groups’ frequent out-of-park excursions.

Karama asked questions such as “How are you affected, both positively and negatively, by living near the park?” and “How do you feel about gorilla conservation and tourism?” Though he received a wide variety of answers, the common underlying theme was gratitude that the Rwandan government has built schools and invested in their communities. Surprisingly, many of the people reported that the golden monkeys and buffalo posed a far larger problem for them and their crops than the gorillas have. 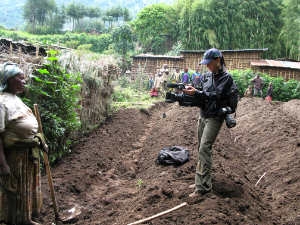 After wrapping up interviews in the local community, Karama and Burbridge traveled to Kinigi to interview Volcanoes National Park Warden Prosper Uwingeli and Community Conservation Warden Janvier Kwizera. A former Karisoke™ Research Center researcher, Uwingeli has now served several years as the park warden and faced many challenges in his work. He referred to the 2009 fire on Mount Muhabura as the most difficult situation he has encountered thus far. (The flames spread from a beekeeper’s torch as he tried to retrieve honey and burned 135 hectares of forest before it was extinguished with the aid of a helicopter.) He also spoke about the challenges facing gorilla conservation today and about his goals for the future of the park. Later in the afternoon, the community conservation warden explained the strategies that the government is using to encourage the local communities to become more invested in conservation efforts. 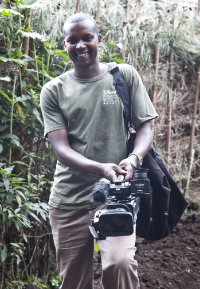 Karama and Burbridge will soon begin to edit the footage they shot and look forward to posting the completed film online. Karama has directed conservation education programs at Karisoke since 2008. He provides conservation education to hundreds of children in primary and secondary schools in the communities that neighbor Volcanoes National Park, works with school-based environment clubs, and conducts programs for park guards. He also helps university students studying or conducting research at Karisoke and takes community leaders on an annual trek to see the gorillas and golden monkeys in the park. He is currently in the second year of his three-year master's degree program.