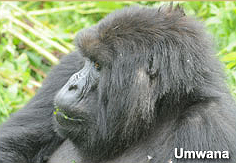 Our trackers at the Karisoke Research Center in Rwanda have been very busy following movements among the many mountain gorilla groups we monitor, as the groups continue to change in composition. One type of change that is especially interesting is when females move from one group to another. Usually this occurs to enhance their breeding opportunities, and we are seeing both younger and older females making changes at this time.

Recently, 26-year-old female Umwana made a "double" transfer, going from Pablo's group to one led by silverback Kuryama, and then to the Titus group (now led by silverback Umushikirano, since the death of famed silverback Titus last year).

Umwana has made group transfers in the past, starting at age 7, when she left her natal group, known as the Susa group. (Her mother was a female named Flossie, who also happened to be the mother of Titus). She is the mother of five gorillas, three of whom are living in Pablo's group and two who emigrated to other groups. Her youngest infant is Akamaro, a 3-year-old infant female. Akamaro is close to the age known for infant gorillas to become independent and she seems strong enough to cope with the somewhat premature separation from mother.

As sister of the deceased silverback Titus, Umwana has a close genetic association with most of the Kuryama group members. In particular the dominant silverback Kuryama and the subordinate silverback Vuba are both Titus' offspring. She seemed to do well in the new group, so it was a surprise when just a couple of weeks later Umwana made a further change, transferring from Kuryama's group to the Titus group. On the day of the transfer (Jan. 16), the two groups were within 800 meters of each other but no interaction site was located, although Kuryama was seen with wounds on his hand and shoulder. Umwana must have moved in the early morning, since a count of the night nests showed that she spent the night in Kuryama's group.

The arrival of Umwana excited the dominant silverback Umushikirano (also a son of Titus). He displayed and hit her, showing his physical force and dominance. The rest of the group was close to them, but female Tuck remained at the edge of the group distant from all dynamics around the newcomer. This is a difficult outcome, as the familial relationship of Umwana to most of her new group members makes potential mating genetically inconvenient…

Umutuzo is an 8-year-old female born in Shinda's group to mother Pasika. When her natal group split after the death of the dominant silverback Shinda, Umutuzo followed the silverback Ugenda, who was leading the majority of the gorillas including Pasika's family. 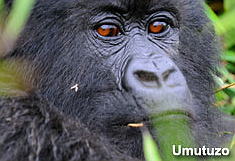 The other resulting group was led by the silverback Ntambara, to which Umutuzo moved in July 2009. The reaction to the transfer was very peaceful and did not include any agonistic interaction.

On the morning of Jan. 8, 2010, however, Ntambara's group and Umubano's group (one of the tourist groups monitored by the Rwanda parks authority — RDB/ORTPN) were within 100 meters of each other, separated only by a ravine. The two groups could see each other, but no interaction was observed. Yet, on the following day the Karisoke tracker team that follows Ntambara's group realized Umutuzo was missing, and a count of night nests showed that she transferred on the previous day. RDB/ORTPN trackers from Umubano's group then confirmed the presence of the new female. We await information as to the success of this latest transfer.

Umutuzo's transfer is probably related to her reaching sexual maturity and is occuring at a normal age in which mountain gorilla females leave the natal group, as part of their reproductive strategy.