Female Kubana Makes Her Move, from Ugenda’s Group to Titus’s 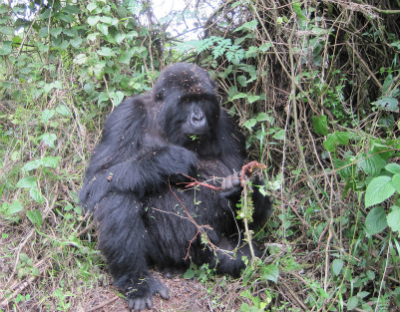 Another adventurous female gorilla has transferred from one of the groups monitored by the Karisoke Research Center to a different group – a common move for female gorillas, usually seeking better reproductive opportunities. Kubana, a 9-year old from Ugenda’s group who has yet to give birth, transferred into Titus’ group earlier this month during an interaction between the two groups that involved exchange of vocalizations but no physical contact. Since Kubana’s transfer, Titus’s and Ugenda’s groups have encountered one another twice, but Ugenda does not appear to have made much of an attempt to win Kubana back.

The day after Kubana transferred, the two groups ranged within 50 km of one another, but although Ugenda made a few vocalizations, he did not even bother to display. Then, a week later, the two groups interacted again. This time, members of the groups mixed, with female Imvune, from Titus’ group, entering Ugenda’s group with her infant for about 20 minutes. The second ranking silverback in Titus’ group, Turakora, kept Kubana and another young female, Ubufatanye, from mixing with Ugenda’s group. Strangely, although the silverbacks faced one another and were in close proximity for 25 minutes, our field staff did not record any displays or aggressions.

Researchers and field staff are not sure why females seem to transfer out of Ugenda’s group so often. One motivation for a female to transfer can be that the males in the group are too closely related to her. However, Kubana was not related to any of the silverbacks in Ugenda’s group. Field staff observe that the silverbacks in the group seem not to be very impressive to their females. Although several of the females in the group should be in estrus, we do not see as many copulations occurring as one might expect. Females will also choose to transfer sometimes in order to raise their rank within a new group. This might have been a reason for Kubana to transfer, since she was the lowest ranking female in Ugenda’s group, along with the opportunity to find a better reproductive mate.

In Titus’ group, Kubana appears to be settling in. Often, during the first several days after a female’s transfer, the new silverback can be quite aggressive toward her, asserting his strength and authority. It is also during this window that females have the opportunity to try to transfer back to their original group or even to a new group, or to decide to stay with the silverback. When a female transfers, field staff collect data on her every single day for 30 days, observing the new dynamics, as female transfers are a central part of gorilla social life.

For the first couple of days, Rano, the dominant silverback in Titus’ group (which is named after his father), displayed and aggressed Kubana. However, this did not last very long, and by late last week, field staff observed that she had integrated well into the group.

It will be interesting to see whether Kubana has her first infant soon. Transferring between groups is a major milestone in a gorilla female’s life, and we look forward to seeing her continue to mature in Titus’ group.