The latest event happened on Aug. 21, when female Nyandwi transferred to Inshuti's group during an interaction between the two groups. She is 8, the age when gorilla females reach sexual maturity and look for the best mating opportunities, which may involve group change. 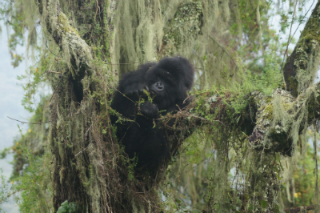 Nyandwi is the sister of dominant male Cantsbee and she is from the same family as 50% of the mature males in Pablo's group. This close family relationship with potential partners justified her move.

The transfer did not occur without an intense resistance from Pablo's silverbacks. The interaction lasted two hours, during which Cantsbee and Gicurasi from Pablo's side displayed and had physical fights with silverback Inshuti, from the other side.

Considering his old age, it was particularly surprising that Cantsbee actively participated in the fight, both hitting and being hit by Inshuti.

Nevertheless, the beta male Gicurasi was the most heavily involved, facing Inshuti in strut stance posture at the closest distance. The two silverbacks exchanged many displays, including loud chest beats and ground hits. At the same time they were pulling down branches and hit each other in a typical sequence of behaviors accompanied by hoots (hooting vocalization) and loud screams.

The members of the two groups kept somewhat separate, behind the respective silverbacks. Nyandwi approached Inshuti after the first hour. She was soon kept on that side by inshuti who displayed and pushed her away from Pablo's silverbacks.

The interaction came to an end when Inshuti started moving away with his group, now including Nyandwi, and Pablo's group started walking to an opposite direction.

Considering the dispersal of three adult males that left Pablo's group on Aug. 16 (and have now been seen traveling together far from Pablo's group), it seems that Pablo's group, though still large at 46 gorillas, is facing a difficult phase.