We are incredibly saddened to report that 24-year-old dominant silverback Bwenge­ ─ a favorite gorilla among trackers and scientists ─ was found dead this morning by Fossey Fund trackers.

On Sept. 20 and 24, Bwenge had interactions with lone-silverback Turatsinze that left him wounded. Bwenge appeared to be healing, but a necropsy will help us better understand this unexpected death and learn if it was related to the recent interactions. 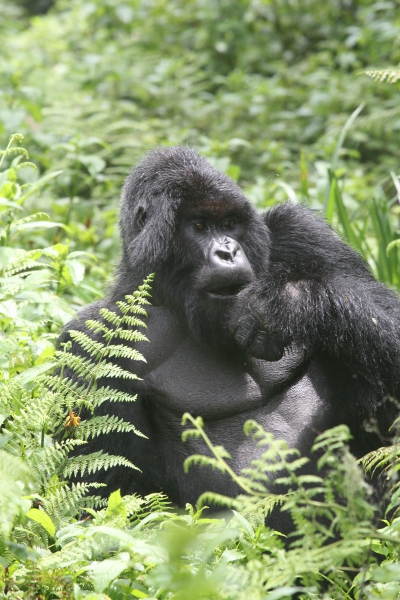 Bwenge, born on March 22, 1990, was the son of legendary silverback Titus (former leader of Beetsme’s group) and Ginseng. Bwenge grew up in Beetsme’s group for the first 16 years of his life. He split from his native group to form his own on Jan. 3, 2007. By doing so, Bwenge became the first of a new generation of males to break with the three long-established leaders: Titus, Cantsbee, and Shinda.

Bwenge was followed by two females, and that was the beginning of his successful story as dominant silverback. The group grew in size rapidly, and after just three weeks females from Pablo group joined him. Among those was the elder Maggie, 34, who remained loyal to Bwenge’s group to this day.

For many years the group had a calm routine. Bwenge demonstrated excellent paternal skills especially when he took care of two infants (now subadults), Ntaribi and Akaramata, who were orphaned at a young age after the deaths of their mothers. With them, Bwenge formed the strongest bond among all his loyal group members.

Bwenge’s was a single-silverback group living in the Virungas. It is always uncertain how a group will cope with the loss of a such a leader, and since Bwenge was the single male leader of his group, the Fossey Fund will be closely monitoring how they adapt. Latest updates from the field immediately afterward indicated the group is moving calmly in the other direction under Maggie’s lead.