One of the oldest mountain gorillas monitored by the Fossey Fund ─ dominant silverback Ugenda ─ died overnight after an intense interaction with lone silverback Giraneza. The group he led is currently in some disarray.

However, the full story is more complicated and is still being pieced together, since it relates back to the death of silverback Bwenge last year and the subsequent events affecting that group. The remaining members of Bwenge’s group were first led for some weeks by elderly female Maggie, before merging with Ugenda’s group in the fall. Things seemed stable for a while, but in early March, Maggie left the group, was seen briefly with Giraneza, and then began traveling on her own. Fossey Fund trackers were able to follow her trail until the end of March, and since then she has not been located. However, Giraneza interacted with Ugenda's group on March 18. 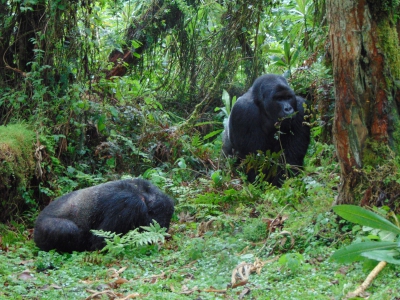 The interaction that led to Ugenda’s death overnight appeared to have started yesterday morning. Our tracker team that searches for Maggie followed a trail of a silverback and then encountered silverback Giraneza, together with one female from Ugenda’s group (Ukuri). Although he has had a small group in the past, Giraneza became a lone silverback sometime between September 2013 and January 2014.

Upon following Giraneza, trackers were led to the site of the interaction, where they found the severely wounded Ugenda, along with two young female group members who then ran away. Veterinarians from Gorilla Doctors and additional Fossey Fund staff arrived at the scene within a few hours, to assess Ugenda’s condition. He was laying face down, not moving and showed irregular breathing. Some painkillers, fluids, antibiotics and steroids were administered, but the situation was deemed dire.

While the preparation for this was underway, silverback Giraneza remained nearby and finally approached the non-moving Ugenda. At this point, Giraneza displayed and hit Ugenda’s unmoving back, before our trackers herded him away. Giraneza showed no wounds of his own. 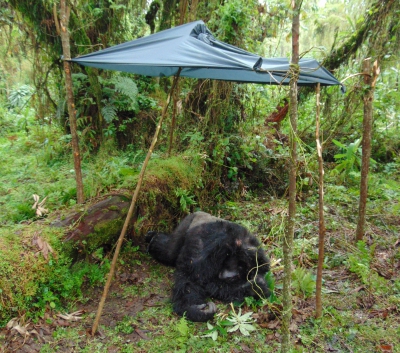 A rain cover was then built over Ugenda as everybody left the scene for the night. Our staff then encountered six of the group members more than a kilometer away and moving farther away. Young male Ntaribi seemed to be trying to herd them. They appeared scared and avoided our trackers. The only other silverback from Ugenda’s group ─ Wageni ─ was found alone in another direction, with a minor wound on his shoulder.

Today, the two young females were seen back with Ugenda's body. At one point, Giraneza was not too far away either, and was alone. Wageni was still on his own as well and Ntaribi was not found.

Stay tuned for further updates, as our trackers monitor the situation and the gorillas work out their next steps.