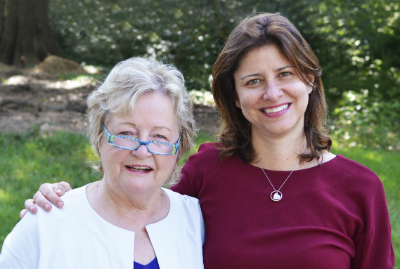 Since 1995, Dian Fossey Gorilla Fund President and CEO Clare Richardson has brought stability and leadership to the organization, even during times of dramatic change and crisis in Africa. She helped bring the legacy of Dr. Dian Fossey to new levels and has overseen a tremendous expansion of the Fossey Fund’s work in science, education, and community development, as well as conservation. In addition to these accomplishments and her managerial duties as president and CEO, Richardson has played a large role in fundraising and strategic planning as well.

On Oct. 1, the start of our new fiscal year, Richardson adopted the new title of President Emeritus, Strategic Initiatives Officer, a role that will allow her to concentrate on strategic philanthropy to secure the financial strength necessary for the Fossey Fund to continue making successful strides in mountain gorilla conservation and other facets of the organization’s work in the future.

At the same time, Tara Stoinski, Ph.D., who had been serving as vice president and chief scientist, became the new president and CEO, as well as chief scientific officer. Since 2002, Stoinski had served part-time with the Fossey Fund while simultaneously working as the director of primate research at Zoo Atlanta. She is a widely published expert in gorilla behavior and has conducted extensive fieldwork and other research in primatology for more than 20 years, implementing information learned from gorillas in the wild to gorillas in captivity.

Stoinski received her doctorate in psychology from the Georgia Institute of Technology and her master’s in biology from Oxford University. She has secured many grants for research and conservation activities and has maintained adjunct faculty positions at Emory University and the Georgia Institute of Technology. Stoinski also has leadership roles that include serving on the executive committee of the International Union for the Conservation of Nature’s Section on Great Apes, chairing the Association of Zoos and Aquariums’ (AZA) Ape Taxon Advisory Group, and serving as a management group member and conservation advisor for AZA’s Gorilla Species Survival Plan. 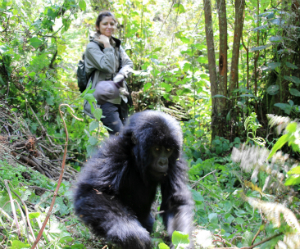 Stoinski notes that she has always loved animals and had numerous pets as a child, including dog, cats, rabbits, mice, and even quail, which she and her father raised from hatchlings. From a young age, she hoped to be a veterinarian, but her career path changed when she decided to go to England for her master’s in biology. Afterward, she knew she wanted to go to Africa—though not necessarily to work with gorillas.
“There are a lot of people who were inspired by Dian Fossey and gorillas from a young age. For me, it evolved over time. I first fell in love with Africa. Then from experience working at Zoo Atlanta, I fell in love with gorillas too,” Stoinski said.

One of Stoinski’s primary research interests is male social dynamics among gorillas, which accounts for two of her favorite gorillas: Taz at Zoo Atlanta and the late Bwenge in the mountain gorilla groups followed at the Fossey Fund’s Karisoke Research Center. Stoinski has watched Taz evolve from a young, often subordinate, trouble-maker to a very bright, successful group leader. Silverback Bwenge, who died unexpectedly on Oct. 1, also holds special meaning for Stoinski, whose daughters have stuffed animal gorillas fondly named after him. “I loved to see him interact with young gorillas and how gentle he was,” she said. “He epitomized the nickname ‘gentle giant’.”

In preparation for starring in the 2005 remake of the film “King Kong,” actor Andy Serkis came to observe gorillas at Karisoke. One of the gorillas he observed was Bwenge. Stoinski recalls Bwenge interacting and playing with his younger brother, during which they were both laughing. “A lot of people don’t realize gorillas can laugh. There’s a part in the film where King Kong laughs, and I always like to think that scene was inspired by Bwenge.”

Concentrating on the future 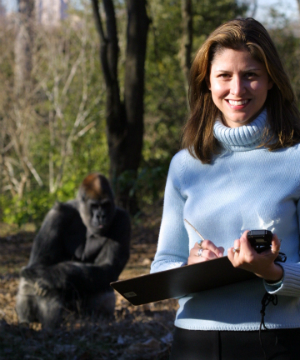 Stoinski considers herself lucky to have worked with two endangered species that have experienced conservation successes: golden lion tamarins and—of course—mountain gorillas. She said being able to see a reversal of the tides, which for both species has required incredible effort and longevity, is reassuring because many populations are unfortunately decreasing. Stoinski would like to work on applying our knowledge to other populations in the future, as the Fossey Fund has begun to do with Grauer’s gorillas in Congo.

Stoinski hopes to continue building our capacity in Rwanda to continue the unique success of the Fossey Fund’s integrated approach to conservation, which combines direct protection activities with scientific study and community needs in relation to conservation. A top priority for Stoinski is providing training and educational opportunities for our staff in Rwanda and Congo to enable them to be leaders both within our organization and in the larger conservation community.

When asked if she felt like she is following in Dian Fossey’s footsteps, the Fossey Fund’s new president and CEO had this to say: “ Dian Fossey was truly a pioneer, going to Africa on her own almost 50 years ago to study a species that was considered aggressive and dangerous. Mountain gorillas might not remain on this planet if it was not for her work. So I do not feel that those are footsteps I could ever fill, but I do feel incredibly lucky to be doing what I’m doing, and I feel like Dian would be proud of where we are today and how well the mountain gorilla population is doing.”