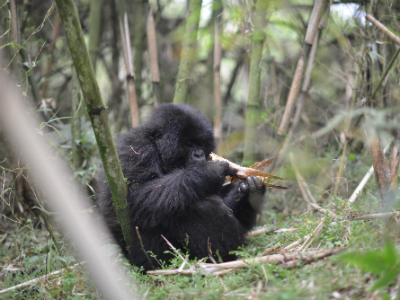 During our nearly 50 years of studying the mountain gorillas, the Fossey Fund has learned a lot about the plants they consume and the interactions between distribution of food plants, habitat suitability and the gorillas’ movements. Although the gorillas consume up to 200 plant species, bamboo is a key food and very important for a number of reasons.

Gorillas eat both bamboo leaves and bamboo shoots. While most gorilla food plant species are available throughout the year, bamboo shoots – a real favorite – are only available during the rainy seasons. Because the bamboo grows in a bamboo “zone” at the very edge of the Volcanoes National Park, bamboo shoot season is the time of year we often find the gorillas ranging outside of the park. Such behavior can lead to a variety of problems, such as eating eucalyptus trees and other crops or getting too close to human communities, and requires considerably extra monitoring and protection by our staff.

In addition, bamboo is also the key food species for golden monkeys, which are found exclusively in the bamboo zone and are unique to this region. And even buffaloes and elephants in this habitat feed on bamboo shoots.

Despite the importance of bamboo to this ecosystem, until recently there was no scientific data on the ecology of the bamboo, such as its density, the factors affecting its growth patterns, correlations with natural conditions, seasonality, or its true relationship to gorilla-ranging patterns. It has been hypothesized that the varying abundance or shortage of bamboo shoots may affect why we see such variability in how frequently gorillas range outside of the park. For example, in the spring of this year, the gorillas ranged out of the park 52 times, compared with only 15 times last year.

To increase our understanding of this critical food resource, the Fossey Fund initiated a long-term bamboo phenology study in 2013. Our teams established 82 plots, each measuring four meters by four meters, at varying altitudes in the bamboo zones. Each year, these same plots are monitored during the two wet seasons from March to May and from the end of September to mid-December. Each plot is visited every two weeks and a variety of data are collected, such as measurement of bamboo shoots, number of mature bamboo plants, and whether the forest canopy is open or closed. 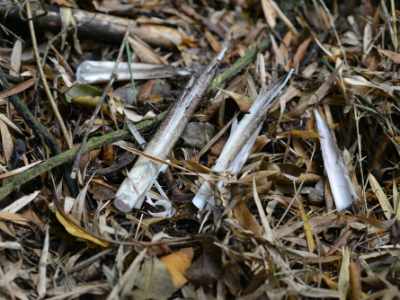 Once we have three full years of data on shooting patterns, we will analyze how the amount of bamboo shoots correlates with gorilla ranging patterns and will also try to determine what factors, such as the amount of rainfall or sunlight might influence the number of bamboo shoots produced. Such information will be valuable for conservation management and protection of the gorillas and their habitat.

Earlier this year, we initiated a similar project in Kahuzi-Biega National Park in the Democratic Republic of Congo as part of our transboundary collaborative project, in conjunction with Congolese park authorities (Institut Congolais pour la Conservation de la Nature/ICCCN). Our goal is to compare across sites both the role that bamboo shoots play in the diet of the gorillas as well as what factors influence bamboo growth patterns.

The bamboo phenology studies are coordinated by the Fossey Fund’s Biodiversity Research Program Manager Deogratias Tuyinsingize. "The phenology of the bamboo is an interesting project,” he says. “Sometimes I have counted more than 100 bamboo shoots in one plot and then on the next visit, I found the gorillas had fed on all these bamboo shoots. This shows me how much the gorillas really like the bamboo shoots!”

“My field team really enjoys counting the bamboo shoots too,” says Deogratias. “They are very happy when the shoots are there, and often shout: ‘Now there is food for the gorillas!’ Imagine what it would be like if there were no bamboo in the gorillas’ habitat.”