In addition to daily protection and study of gorillas, the Fossey Fund works with local communities to help increase conservation awareness. This takes place on many levels, from programs for primary and secondary school children to working with hundreds of science students from local colleges. We also provide conservation education opportunities for the general communities near the park where the gorillas live, many of whom have never had an opportunity to see the gorillas or to learn about them and their important forest habitat.

This spring, we organized gorilla treks for groups of local leaders, along with discussion sessions. In June and July we also began showing conservation-related films in 12 sectors adjacent to the national park, inviting local people to come for free and to participate in question-and-answer sessions afterwards with Karisoke education staff. 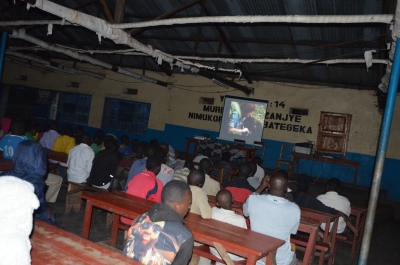 This year, we showed two documentaries. The first was "Titus: The Gorilla King," a documentary from the PBS Nature series, which followed the life of the late silverback group leader Titus, who was followed and studied by the Fossey Fund for many years. The second film was "Hope," produced by Craghoppers and narrated by Sir David Attenborough, showing the work of the Fossey Fund protecting and studying gorillas in Rwanda.

During June and July, approximately 3,500 people, from eight different villages and three schools, have attended these movies, with more showings still to come. Local communities have requested more showings and movies, and oral evaluations after the films showed that most participants learned about the major threats to gorillas and opportunities for them to help with conservation.

The Fossey Fund is grateful for our partnership with Nature's Path, which shares our vision for a healthy and sustainable world. Support from Nature's Path helps fund our education projects, including this conservation film series.