An important aspect of the Fossey Fund’s work to save gorillas involves working with local communities near gorilla habitat, to bring conservation information and awareness to as many people as possible. For the past two years we have also been organizing visits by local community leaders to see the gorillas in Volcanoes National Park, where we operate our daily monitoring and protection patrols, as well as training and workshops about gorillas and conservation. 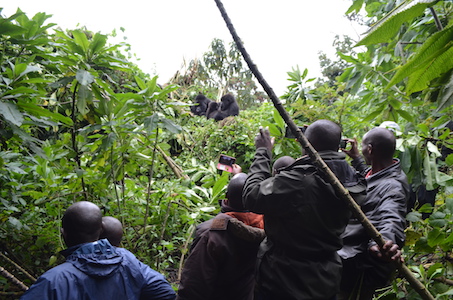 This year we had 48 local leaders attend the training, up from 38 last year. They included local mayors, school headmasters, religious leaders, journalists and others, from the districts adjacent to Volcanoes National Park.

“It is very important to see the environment found only in the Volcanoes mountains,” says Jeremie Sinamenye, mayor of Rubavu District, who was on the gorilla trek last month. “This will help us to sensitize local people about the importance of wild animals in the park, to care about them and show them how they may contribute in protecting wild animals in their forest home.”

Theoneste Uwanzwenuwe, mayor of the Nyabihu District, said he was very excited to see the gorillas. “I am very happy to see them with my own eyes in their forest home. I wish all people in our country can know the gorillas and their importance to the country. In terms of conservation, it is first our responsibility to protect wild animals in their forest home, by showing local people the importance of wild animals to them, to the country and to the world.”

The local leaders program has had a very successful reception in the community, with coverage by local television and radio stations.