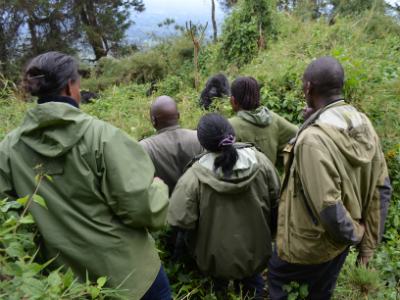 An important aspect of the Fossey Fund’s work to save gorillas involves working with local communities near gorilla habitat, to bring conservation information and awareness to as many people as possible. In addition to working with schools at all levels, for the past several years we have also been organizing visits by local community leaders to see the gorillas in Volcanoes National Park, where we operate our daily monitoring and protection patrols.

This year, a group of 37 leaders were selected from districts around the park and involved people from many disciplines, including school headmasters, journalists, religious leaders, and government officials such as agronomists and education officers.

After the gorilla treks, which were made in two groups, the participants came to the Fossey Fund’s Karisoke Research Center offices to discuss gorilla conservation, including such topics as:

The information was also broadcast on local radio and television stations, to help further spread the message of gorilla conservation. In addition, a follow-up workshop is now being organized, to help build partnerships and work in greater depth with communities on conservation efforts.

After the gorilla treks and initial meetings, a survey of the local leaders was conducted to assess their levels of learning about the gorillas and selected conservation issues, as well as to get their input about various conservation actions that can be taken. Participants came up with many useful suggestions, such as holding conservation meetings in villages around the park, increasing anti-poaching education and messages, and putting more conservation programs on local radio and television. They also felt that they could personally help by promoting conservation in their communities, reporting illegal activities in the forest, and even by planting trees on their own plots.

For many of the participants, this was the first time they had visited the gorillas. Government administrators in the area often rotate to different sectors, so they stressed the importance of continuing this program. And, most of the participants rated the value of the park as extremely high, recognizing that it brings important community benefits, such as tourism dollars, infrastructure improvements, and community projects, as well as environmental benefits, including fresh air, rainfall, control of climate change, and habitat for animals.