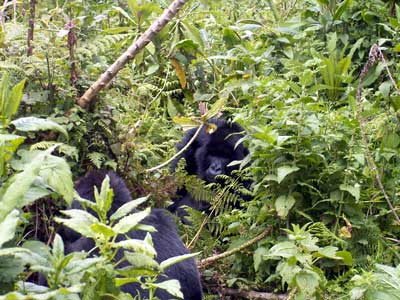 The return of Amahoro, a 19-year-old silverback, to his natal group (Shinda's), has raised many eyebrows, because just six months ago he had left the group and become a lone silverback! This return is a very rare event, with all group members accepting him as if he had never left, including dominant silverback Shinda himself (who is not normally known for his passive and tolerant nature). Everyone at Karisoke continues to watch the situation with great interest, as Amahoro remains something of an enigma.
Mountain gorillas normally live in groups, with one dominant silverback (fully adult male), younger males, females and various juveniles. Our decades-long observations at Karisoke have shown us some variations on this theme, but generally speaking the model tends to apply.
Recently, a number of young silverbacks in the groups we observe have gone out on their own, either to try to start new groups of their own, or to continue as lone silverbacks, and this is not unusual. But it is very unusual to see one of these lone silverbacks return to their original group, as Amahoro has just done.