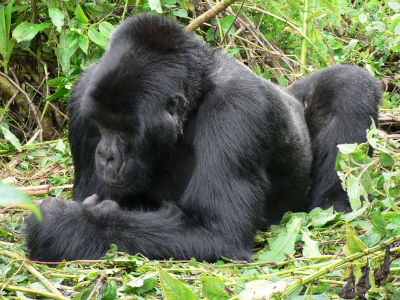 It was with great surprise that, on Sept. 25, the field staff of Karisoke™ Research Center encountered silverback Giraneza after two years without any sign of him. That morning the tracker team, led by Francois Xavier Ndungutse, happened upon the lone silverback while tracking Pablo’s group, one of the main groups of gorillas we have monitored for years and Giraneza’s natal group.

Giraneza was located in the highland of Kimbagira, an area often used by Pablo’s group. He accepted the presence of human observers near him, seemingly undisturbed, acting calm and eating peacefully. He was in the fresh trail of Pablo’s group, which had changed direction, possibly to avoid an interaction with him. Indeed, our trackers determined that the group had walked a long distance away, moving quickly downhill, which made it very hard for our trackers to follow their trail. Clearly, the males of Pablo’s group were intimidated by the potential rival, which made them push the group to another area.

Team leader Ndungutse easily identified the silverback, even though he had been missing for such a long time, and was glad to see him. ”I was impressed by the developed silver color on his back. He grew up a lot, becoming a very large male,” Ndungutse said. 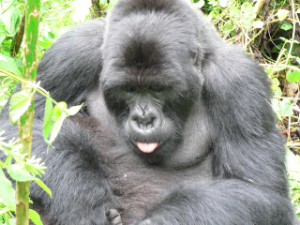 When Giraneza left Pablo’s group in July 2008, he was 13 years old. He used to follow the elderly silverback Pablo and together they moved away from the group to face an interacting group led by silverback Inshuti. That day turned out to be fatal for old Pablo, and so Giraneza ended up giving solitary life a try. He re-approached the group after two weeks, but the young males chased him away. After that, he never tried to enter the group again and had not been seen until now.

As a lone silverback, Giraneza will not be followed regularly by the field staff of Karisoke, but it has been extremely important to locate and identify him, thus counting another gorilla ranging in the same area of the groups that we monitor. Since the beginning of 2010, six lone silverbacks have been located and identified, and it will be of great interest to see if any of them will succeed in forming their own group, since each of them interacted at least once with the established groups.