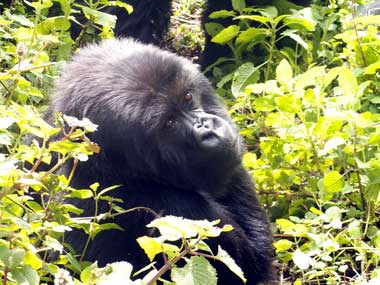 Trackers and scientists at DFGFI's Karisoke Research Center observed some rare events this past month, as they continue their daily observations of three mountain gorilla groups.

Bukima, a female in Beetsme's group, left her natal group and transferred to the lone silverback Inshuti, who had left Shinda's group at the beginning of last year. After a year of gaining experience as a lone silverback, including many interactions with Beetsme's group, Inshuti finally succeeded in acquiring a female – Bukima. The newly formed couple stayed together for more than two weeks and our new “lone silverback patrol” was able to follow them for a week.

Unfortunately, Bukima clearly did not feel comfortable in her new life with Inshuti and in the end, on April 21, Beetsme's trackers found Bukima back in her natal group! Bwenge, a silverback in Beetsme's group who is known to be highly attracted to Bukima, continued following her almost step by step, as usual. The same day, Inshuti stayed close to Beetsme's group and tried to get Bukima back, but without success.

Since many of the adult males in Beetsme's group are closely related to Bukima, it is perhaps important for her future breeding success that she leave the group as some point, to begin a new life elsewhere. Only time will tell!

We are proud that this year we have been able to start up our “lone silverback patrols.” This has come about because of the increasing number of silverbacks leaving the research groups. In previous editions of E-news, we reported on three silverbacks leaving Shinda's group in the last year, and another, Ubwigenge, has recently left Beetsme's group. Our new patrols have a particularly difficult job tracking lone silverbacks, because they tend to travel long distances, compared to the distances normally covered by gorilla groups. There is also the challenge involved in tracking gorillas who move so quickly. However, these patrols give us an excellent opportunity to gain a greater understanding of the behavior of maturing males and the lives they lead after leaving their natal groups.