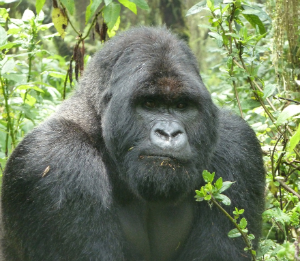 Today and yesterday the trackers from Kuryama's group met the lone silverback Twizere. Today he was on the trail of Kuryama's group, with whom he interacted yesterday. The interaction was relatively easy and ended up very quickly when silverback Vuba made several displays, forcing Twizere to move away.

Twizere became a lone silverback in August 2007, leaving Shinda's group, which was one of the three large multi-male groups that Karisoke had been following. Since then we rarely saw him. He was seen another time this year in April, again interacting with Kuryama's group.

Silverbacks who travel on their own will approach established groups in hopes of attracting females and starting their own group, but the groups' males guard their females. Only one lone silverback we have followed in recent years has succeeded in starting a group.