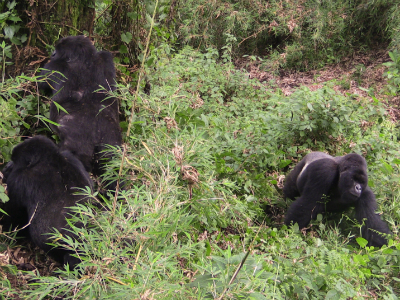 Since Friday, Dec. 4, lone silverbacks Inshuti and Urugwiro have interacted with two of the mountain gorilla groups the Dian Fossey Gorilla Fund monitors. On Friday, Inshuti (notoriously known among Fossey Fund staff) began following Isabukuru’s group and interacted with auditory exchanges. Over the weekend he continued to follow the group silently but no interaction occurred.

The second-leading silverback in Isabukuru’s group—Kubaha—showed signs of illness over the weekend, which could have been detrimental for the group had there been an interaction. Today, trackers reported he appeared to be in an improved condition and that Inshuti was still near the group, around 500 meters away.

Today, lone silverback Urugwiro interacted with Titus’ group for many hours and continued to follow the group even as trackers were leaving the forest. The three silverbacks of Titus’ group kept the group moving to avoid Urugwiro, displaying and running at the lone silverback. There was no physical fight among the gorillas, but the silverbacks did have superficial wounds, likely caused from moving in the dense bamboo forest where the interaction took place. Urugwiro is 15 years old and became solitary in May 2014. Previous to that, he was in Pablo’s group.