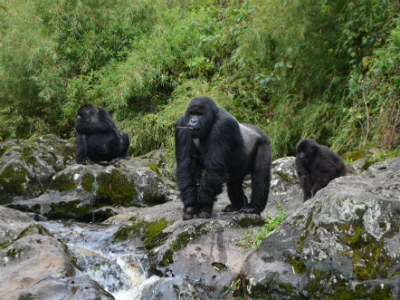 One of the oldest mountain gorillas monitored by the Fossey Fund ─ dominant silverback Ugenda ─ died overnight between April 7-8, following an intense interaction with lone silverback Giraneza. It was an especially unfortunate loss, since some of the Ugenda group members had only recently joined him, after they lost their own dominant silverback (Bwenge) late last year, creating an enhanced group of 14 members. With Ugenda’s death, the group is facing an unclear future.

Ugenda was born on Oct. 20, 1987, in Group 5, one of the groups originally monitored by Dian Fossey. After a split in 1993, he became part of Shinda’s group. This started as a one-male group but several of the young males stayed on as they became adults, including Ugenda. Ugenda established a close relationship with the dominant Shinda, which enabled him to rise up to the number-two position in the male hierarchy, even though he was only third in age. Notably, the group was also low in females, so male competition was high. Ugenda’s close relationship to Shinda certainly helped him remain the group.

Ugenda’s mother was Walanza, who was born in 1969 and was named and studied by Dian Fossey. Although Walanza was known for her high-strung personality, Ugenda had a more even temper. Walanza died in 2006.

When Shinda died in 2008, his group split between two other silverbacks in the group – Ugenda and Ntambara, with Ugenda having 18 individuals. But in June 2009, one of Ugenda’s members, silverback Urugamba, took his own path, followed by five others, making a subgroup that finally became separate in 2010. (Urugamba later died in 2013).

After that, Ugenda faced another challenge when lone silverback Gushimira fought him and took away three remaining females, leaving Ugenda with silverback Wageni, a subadult, two juveniles and an infant – quite a motley group! After that the group saw numerous changes, various adult females coming and going, and young Sabato being caught in a poacher’s snare (and successfully freed after an intervention).

Appreciated and loved by trackers 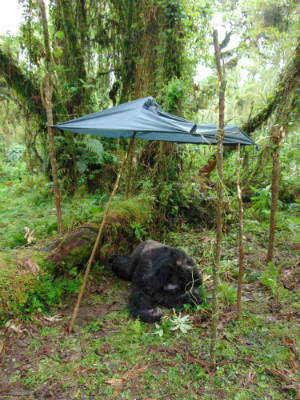 Fossey Fund trackers at Karisoke have spent many years observing Ugenda and grew to admire and love him. Long-time tracker Jean Damascene Hategekimana (known as “Fundi”) says that Ugenda was a kind, calm and quiet silverback, tolerant towards people. He feels Ugenda was a “protegé” of Shinda (who was very protective towards Ugenda) since his childhood.

“He did not like to fight during interactions, even when Shinda was still alive,” says Fundi. “Ugenda was interested in protecting the females while Shinda and other silverbacks were busy fighting.” In addition, says Fundi, even though Ugenda was not a fighter, he showed his strengths after the death of Shinda. Instead of being dominated by silverback Ntambara, who was an active rival and a little older and thus should have been dominant over Ugenda, Ugenda ended up with more individuals after the group split.

Jean de Dieu Habumugisha, who has been a head tracker in Ugenda’s group, says Ugenda was a peaceful silverback that he loved. He points to examples, such as when the remaining members of Bwenge’s group recently joined Ugenda. Normally there would be cases of aggression against infants (including infanticide) under such conditions, but not with Ugenda. Instead, this peaceful silverback protected the new youngsters (one of whom was only a month old) against the other silverback in the group (Wageni), who was aggressive toward them.

Habumugisha said that Ugenda also appeared to protect the trackers themselves from the aggressive (or at least interactive) Wageni. Theodette Gatesire, who is the gorilla program data officer at Karisoke, confirms this. She was once attacked by silverback Wageni; a female gorilla was screaming at Wageni and Ugenda came quickly to see what was happening. Once Wageni saw Ugenda coming, Wageni let Theodette go without hurting her. This was one of several times Ugenda “saved” human researchers from Wageni’s actions.

In the end, a sad scene

It was shocking and heart-breaking for us finding Ugenda at the interaction site, seriously wounded and near death,” says Dr. Winnie Eckardt, research manager at Karisoke. “We remembered how Ugenda cared for gorillas and were thinking about this for many days afterward.”

Trackers built a rain cover for Ugenda for the night, so at least he would be dry and warm in the end. The following days, Ugenda’s dead body became the center of reunion for eight of the 10 dispersed group members who returned to the interaction site.

Unfortunately, just two weeks after Ugenda’s death, silverback Wageni, who might have been able to take over leadership of the group, also died. Although he had also been wounded in an interaction, the actual cause of his death is still being determined. This leaves the remaining Ugenda group members with an even more challenging situation, especially since silverback Giraneza is still in the area.