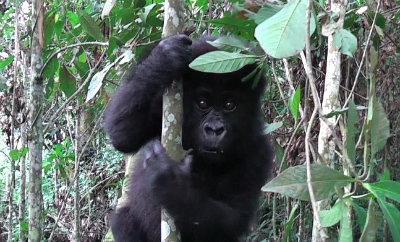 We are saddened by the loss of Kyasa, an orphan gorilla at the Gorilla Rehabilitation and Conservation Education (GRACE) center in the Democratic Republic of Congo (DRC). The male Grauer’s gorilla, about 1&frac12; years old, was rescued in the Walikale area of the Congo in late December 2010. He arrived at GRACE in January 2011 and had appeared to be doing well until recently, when he began exhibiting symptoms associated with a gastrointestinal disorder. He was being treated by animal care experts, but unfortunately, he passed away during the night.

Dr. Eddy Kambale of the Mountain Gorilla Veterinary Project traveled to GRACE and is performing a necropsy (an animal autopsy). Complete results will take several weeks.

Four young orphan gorillas were transferred to GRACE from Goma when the facility opened in April 2010, and three more infants confiscated from poachers, including Kyasa, joined them in early 2011. Six older gorillas arrived from temporary care in Kinigi, Rwanda last month.

“Infant gorillas confiscated from poachers have undergone a severely traumatic experience and usually suffer from a number of medical problems due to maltreatment and poor diet,” says Clare Richardson, president and CEO of the Dian Fossey Fund International, which cared for Kyasa after his rescue and transferred him to GRACE following a month in quarantine in Goma. “We were able to help Kyasa overcome the initial trauma of capture and mistreatment at the hands of the poachers, but even the best of care cannot prevent all threats to the lives of these fragile young animals. He is greatly missed.”

GRACE is the first facility of its kind in East Central Africa. When construction is complete it will have room for up to 30 young gorillas to live in species-typical groups and roam through 350 acres of natural habitat, in the hope of eventually reintroducing them to the wild. The site was donated by the Tayna Center for Conservation Biology (TCCB) and is located adjacent to the Tayna Nature Reserve, near the village of Kasugho, DRC.

GRACE was initiated by the Dian Fossey Gorilla Fund at the urging of the Congolese national park service (ICCN), with funding from the U.S. Fish and Wildlife Service and design and construction assistance from Disney’s Animal Programs and Pan African Sanctuary Alliance (PASA). The Fossey Fund and the Walt Disney Company are the first of several partners that will continue long-term funding and operation of the center.