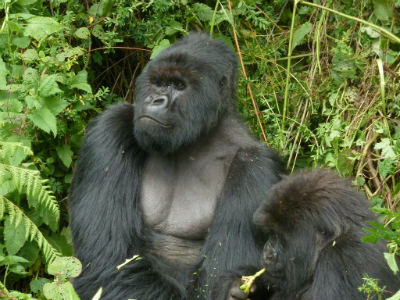 April was a very busy month for the Dian Fossey Gorilla Fund field staff. In addition to being the rainy season in Rwanda, which has not made the job of tracking any easier, we have both lost track of and found some important gorilla groups.

The newly formed Gushimira group had not been seen since March 24, despite exhaustive efforts to locate them, and female Umusatsi, who had not been seen since she left Kuryama's group March 17, was not located again until April 15 (still traveling alone). The anti-poaching team, as well as trackers from the Rwanda Development Board, have joined the groups’ regular trackers in the search efforts on several occasions.

While collaboration to find the dispersed gorillas is extremely important and useful, it is not without its drawbacks. According to Felix Ndagijimana, director of the Karisoke Research Center, when our anti-poaching teams have to support trackers in searches for missing gorilla groups, they cannot do their regular jobs of routine and shock patrols, which are also extremely important. “We do see a direct correlation in the field between the times when anti-poaching teams are not doing their patrols and spikes in the number of snares found later.”

Though the Gushimira group has caused us to use a lot of manpower in searching for them, Ndagijimana says that currently there is no other cause for concern for the groups’ wellbeing. “Before the Gushimira group formed, the individual silverback Gushimira had disappeared for quite a long time. We expect he has taken the females to another area he is familiar with and where he is more comfortable ranging. Of course, we will continue to look for them to confirm this.”

With our workforce already spread so thin due to the missing Gushimira group, it has been difficult to allocate trackers for Giraneza’s group, which recently returned to Rwanda. We stopped monitoring that group in Sept. 2012 when they crossed the border into the Democratic Republic of Congo. Our first encounter with them since their disappearance was on Jan. 29. We were happy to see Giraneza and the two females, Taraja and Nyandwi, all together, although Nyandwi seemed to have an injury on her left arm. Since that first sighting in January, we encountered them seven more times in February and March, during which time we were able to confirm that Nyandwi’s injury had healed. In a meeting with the group on March 22 when we found Giraneza interacting with Bwenge’s group, we happily discovered that Taraja had given birth. The infant was estimated to be a week old at the time and in very good health, which continues to be the case. 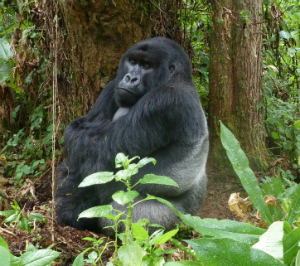 Ndagijimana cited a recommendation of the International Union for the Conservation of Nature's Best Practice Guidelines for Great Ape Tourism as one of the reasons why it was essential for us to resume monitoring the group: “Of course, our wish is to be able to monitor all the habituated groups, for scientific research purposes, but it is particularly important to carry out regular monitoring and protection of groups that have been habituated to humans, as their habituation leaves them more vulnerable to threats like poachers.” The need to monitor the group is even more important with the discovery of the new infant, as infants have low survival rates. Partial monitoring of the group resumed in March, with full-time monitoring having resumed in mid April.

Reconnecting with the Giraneza group has been very exciting, and we are looking forward to finding Gushimira’s group, as the monitoring of both groups has particular significance for the Fossey Fund. As Gorilla Program Manager Veronica Vecellio puts it, “In 45 years of gorilla monitoring we have had very few occurrences of a solitary male forming his own group. Gushimira’s and Giraneza's groups are examples of this, so they give us an excellent opportunity to investigate and compare the development of newly established groups.”

These events in the field this past month — losing track of Gushimira’s group and finding Giraneza’s group — have caused us to consider the possibility of hiring more trackers and the potential need to adjust our methods of tracking when there are major changes such as group splits, missing groups and the return of old groups. In times of major shifts in the gorilla groups we monitor, we need to be able to accommodate all of the groups for both scientific purposes and as a responsibility deriving from our habituation of them. There is no easy answer, but we are working to find the best solution, for our organization, for our trackers and for our gorillas.