Snatched from the forest by poachers after his mother was killed. . . Kept in miserable conditions for months. . . Taken back and forth on the road, to be sold for big money. . . Rescued in the town of Lubutu in the Democratic Republic of Congo (DRC) and transported by car and plane to the big city of Goma… 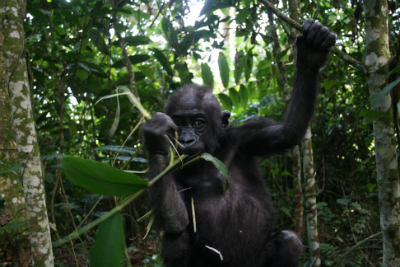 Finally, the ordeals of infant Lubutu Uhuru came to an end, when he was successfully transferred to GRACE (the Gorilla Rehabilitation and Conservation Education center) on April 15. A haven for confiscated Grauer’s gorillas in eastern Congo, GRACE will not only provide Lubutu with adequate care, but also give him a new gorilla family and the chance to some day return to life in the wild.

Estimated to be around two years old, Lubutu is the sixth gorilla to arrive at GRACE during the past year. Although he had already cleared all veterinary exams in Goma, he will spend the four post-travel weeks in isolation before being introduced to his peers.

During quarantine Lubutu has three caregivers on duty, who rotate so that one sleeps with him during the night and two spend time with him in the forest from the crack of dawn until sunset. Fortunately, little Lubutu is adjusting really well both to the new surroundings and to the new human faces in his life.

“He is very easygoing and has accepted the caregivers without any trouble,” reports Luitzen Santman, GRACE interim manager. “On the one hand this is making our immediate job easier, but on the other hand this is a clear symptom of the abnormal life he had been living for quite a while now. He has been around humans for so long that he behaves like a pet. At GRACE he needs to learn how to be a gorilla again.”

By contrast, Kyasa, the orphaned baby gorilla who arrived at GRACE in January, had a much harder time trusting his new caregivers here, due to the traumatic experiences he had been through and the overall fear of humans he had developed. Slowly, however, Kyasa bonded with the caregivers and has since made tremendous progress, both physically and psychologically. He is now thriving, and is almost completely integrated with the other four, bigger, gorillas. Mapendo, Kighoma, Amani and Ndjingala have formed a cohesive group since April 2010, and they have by now fully accepted Kyasa as part of their family. They are separated only at night, when Kyasa still sleeps with a caregiver, but this gap too will be bridged in the immediate future. 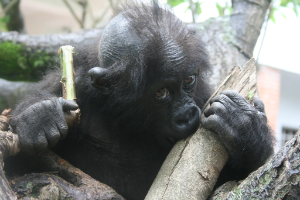 It is everyone’s hope that in a few weeks’ time Lubutu will also be integrated without any major problems. For now, however, he has a lot of catching up to do. Due to a completely improper diet and major stress during his long captivity, he suffered significant weight and hair loss. Luckily, he has a very good appetite, and he is delighted with all the forest foods at his disposal now. He also receives milk and sosoma – a very nutritious blend of soy, sorghum and maize – so that he can gain his strength and stamina back. He is active in the forest, although still wary of wandering off on his own. As soon as he hears unfamiliar noises he sits quietly, listens, and searches for the comfort of the caregivers.

As Kyasa is being integrated and Lubutu rehabilitated, six other Grauer’s gorillas currently housed at a temporary facility in Rwanda are ready for their transfer to GRACE. Aged between five and nine years old, they were originally caught by poachers in eastern DRC – the only place in the world where Grauer’s gorillas live in the wild – but have been cared for in Rwanda for several years now, as Congo lacked an adequate facility and security at the time. It is envisaged that within a few months, all of the 12 gorillas at GRACE will be brought together in one family.