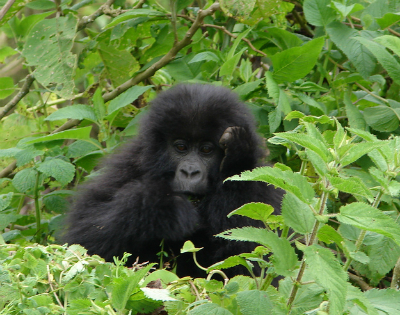 When Urugamba’s team found the gorilla group on Thursday morning, the trackers saw that the infant Turate had a piece of rope encircling his ankle, indicating that he had been caught in a snare. They tracked backward along the group’s trails in order to locate the snare. When they found it, the trackers could see that it had already been destroyed.

Although there was flattened vegetation surrounding the snare, it is still unclear how Turate was freed. There are several possibilities. It may have been his own doing, if he was able to chew through the rope, or he may have been freed with the help of other gorillas in the group. Finally, he may have been lucky in that the snare could have been old and easily broken. Fortunately, the rope that remained on Turate’s ankle was not very tight, allowing him to move, feed, and play normally.

We hoped that Turate or an adult gorilla would be able to get the remaining rope off without an intervention, since it was so loose. However, a team prepared to intervene, should Turate be unable to remove the rest of the snare from his ankle himself. Drs. Dawn Zimmerman and Jean Felix Kinani from Gorilla Doctors went to visit the group on Friday with Fossey Fund staff, including post-doctoral fellow Winnie Eckardt and experienced trackers.

Fortunately, when the team arrived, the snare was already gone from Turate’s ankle and no intervention was necessary. We are always happy when gorillas manage to remove snares themselves, as interventions can cause further stress to the group.