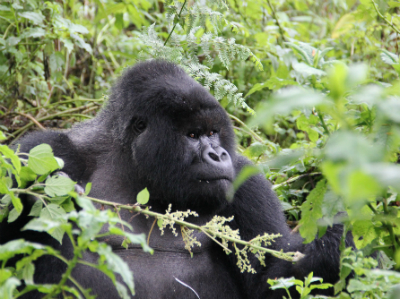 The Fossey Fund is about to finish its first year of observations of the newest mountain gorilla group we monitor: Mafunzo’s group. The newly created group was first seen on Jan. 27, 2014 and was composed of young silverback Mafunzo—who turned 15 in June—and two females, Taraja and Umusatsi. Since then, the group has added a member and has also endured many stressful situations.

Silverbacks as young as Mafunzo are much more vulnerable to interactions with lone silverbacks and dominants from other groups, but based on Mafunzo’s genetic and family history, he has the potential to become a long-term leader. Not only does he come from the largest mountain gorilla group ever observed (allowing him to witness an example of strong leadership from an early age), but his two brothers, Cantsbee and Isabukuru, are also successful dominant silverbacks; Cantsbee has led Pablo’s group for more than 20 years!

Despite Mafunzo’s near-perfect background for leadership, he experienced difficulty keeping his group together during 2014, and 2015 is not proving to be any easier.

After the group formed, it became a predictable target for solitary males and other groups. Fossey Fund trackers witnessed a high number of interactions between Mafunzo’s group and other groups or solitary males, and there were likely even more interactions that we did not see. During interactions, Mafunzo’s main strategy has been to face any rivals alone, leaving the females at a safer distance. This has resulted in multiple days where the females were found vulnerably alone and under visible stress. The young silverback’s other strategy has been to avoid interactions altogether by traveling many kilometers in search of a safer location.

The group traveled continuously throughout 2014 and has so far been unable to find a comfortable area to remain for any long duration. The group even traveled to very high altitudes of the Karisimbi volcanoes but appears to have not felt safe there either. This extensive traveling to avoid competitors makes follow-up on the group difficult for Fossey Fund staff, and even with years of experience, it is easy to lose the track of the group for many days at a time.

Fortunately, despite constant travel and stress, the group has seen some successes, such as the transfer of female Nzeli from Isabukuru’s group to Mafunzo’s group in October.

The beginning of 2015 started with another sequence of stressful events for Mafunzo, and Fossey Fund staff is closely following the group’s situation. On Jan. 8, the silverback was not found, and the three females were together but distressed. The females were moving confusedly while hooting, which is a calling vocalization. Even the night nest only revealed three nests, further evidence Mafunzo had not spent the night with them. A lone silverback was 200 meters away from the females, and trackers began worrying that something may have happened to Mafunzo.

On Jan. 10, trackers spotted Mafunzo alone with wounds on his head and body. His wounds were dry, suggesting they may have resulted from an agonistic interaction a few days prior. He was found 300 meters from the females and was making many hooting vocalizations, likely in search of the females.

Then, he disappeared again from Jan. 11-12. Over these two days, the females were calmer than before, suggesting that Mafunzo may not have been too far away from them. On Jan. 13, he was seen again, interacting with Kubaha, a silverback from Isabukuru’s group. Mafunzo was visibly tense, but the two silverbacks kept a distance from each other. During this time, trackers were able to see more injuries on Mafunzo’s body that were not visible before.

Mafunzo was not seen again on Jan. 14, and the three females of his group were not seen from Jan. 12-18. The recent loss of Bwenge, a young silverback who died due to injuries from an interaction, heightened concerns for Mafunzo, his health, and the well-being of his group. Luckily, the group was reunited on Jan. 19, which was a relief to the Fossey Fund. Keep checking our blog for any additional updates about changes within this group.