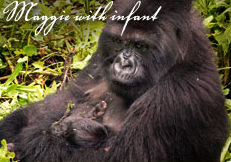 Sadly, exactly one month after his birth, the infant was observed with a swollen right arm. It was later established that the upper arm was broken. The incident that led to the wound is unknown. It is possible that the infant was hurt during an aggressive interaction between Maggie and another group member. The field veterinarians from the Mountain Gorilla Veterinary Project monitored the situation. Frustratingly, there is little that we can do to assist in such situations in the wild. If the infant had survived the injury we do not believe that he would have had a good quality of life, with no chance of using that arm for walking or manipulating food items.

Maggie is an experienced mother and was observed to be caring for her infant with confidence. She has three other surviving offspring all in Pablo’s Group: Rukondo a young silverback, Afrika a young six year old female; and Turibamwe a 3-year-old infant male. 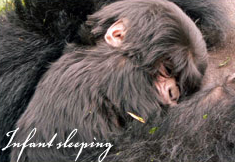 Unfortunately, during this year, four of the 10 gorilla infants born into the three gorilla groups we monitor from Karisoke (Pablo, Beetsme and Shinda groups) have died. The causes of their death have included trauma (broken arm), infanticide and possibly respiratory disease. It is usual in all great apes to have high infant mortality during the first year of life.

Maggie, now 25 years old, was born in Group 5, one of the gorilla groups studied by Dian Fossey. In 1993, Group 5 split after the death of the dominant silverback, Ziz, becoming Pablo's Group and Shinda's Group, both of which we monitor from the Karisoke Research Center.